Americans are famously voting with their feet and fleeing so-called “blue” states run by Democrats, and many of them are heading to fast-growing states such as Texas and Florida.

U.S. Census figures from 2020 are showing the population shift across the country, where 18 states including New York and California saw a drop in population. That exodus has been nicknamed “The Great Migration,” which is attributed to far-left politics and a sky-high cost of living, and to fed-up people choosing freedom over fear during the virus pandemic.

“People who are seeking freedom are fleeing that,” he told the program, “and they're coming to Florida.”

The governor went on to acknowledge the moving vans are going to states such as Texas and Tennessee, too, but he insisted Florida is the “epicenter” of the migration because Americans know it is a “free state” that welcomes them. 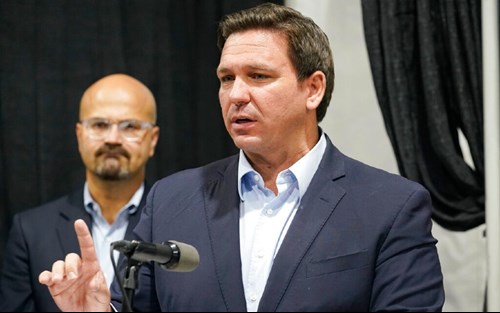 Jimmy Patronis, who serves as chief financial officer for the State of Florida, told Fox News the state is averaging 900 people a day moving there.

Karol Markowicz, a New York Post columnist, explained in a Dec. 27 op-ed she was leaving her native New York and moving to Florida with her husband and their three children. She is moving, she said, for the sake of her mask-wearing children who were forced to eat lunch outside in their New York City schoolyard for fear of the COVID-19 virus. When the cold weather forced the class inside, they weren’t allowed to talk.

“No one has it worse in New York than children,” she wrote. “There is damage being done to the kids of this city, with masking and continued restrictions, and few in leadership seem to care at all.”

In the state of Texas, state comptroller Glenn Hegar said The Lonestar State hit a record $3.6 billion in sales tax in December 2021, which suggests a humming economy bolstered by newly-arriving Texans.

California, which still has the largest U.S. population, has now lost a congressional seat for the first time ever. That loss comes after decades of net migration made up for a fleeing population.

Texas, which has the second-largest U.S. population, has gained two congressional seats while third-place Florida added one.

It's self-destructive, says an immigration reform organization, for the most populous city in America to allow noncitizens to vote in municipal elections.