Subscribe
Democrats scared for 'democracy' that is coming on Election Day

Democrats scared for 'democracy' that is coming on Election Day

Now that the Democratic Party’s all-day extravaganza commemorating Jan. 6 has concluded on Capitol Hill, the real issue behind the somber-sounding warnings of imperiled democracy is rising to the surface: Democrats anticipate an Election Day reckoning by voters, now 10 months away, and must whip up their base to counter it.

“What they are using the event for,” says Lindsey Curnutte of Heritage Action, “is really a Hail Mary [pass] right now.”

AFN reported Thursday that President Joe Biden and Vice President Kamala Harris took turns speaking from the U.S. Capitol. Harris likened Jan. 6 to the Pearl Harbor attack and the Sept. 11 terrorist attack. Biden followed her somber-sounding speech by blaming Donald Trump for the "brutal attack" and "armed insurrection" that came really close, he said, to overthrowing the federal government one year ago. 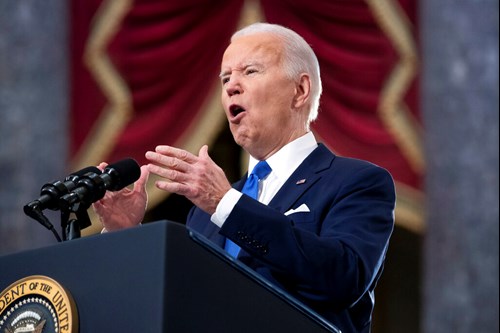 The same AFN story pointed out Biden and Harris took turns, in the same speeches, to pivot the issue to pushing a Democratic-sponsored “voting rights” bill in the Senate. If the goal wasn’t obvious when the President and Vice President began speaking Thursday, the message became clear when their back-to-back speeches concluded with a get-out-the-vote message to their base.

“We must pass voting rights bills that are now before the Senate,” Harris said.

Longtime conservative activist Gary Bauer, who leads Campaign for Working Families, says the truth is there is no confidence in Joe Biden, even among Democrats, after his year in the Oval Office.

“Quite frankly, under other circumstances, he probably by now would have been replaced by his vice president,” Bauer says. “But her poll ratings are even lower than his.”

Democrats and Republicans alike are studying those terrible polls numbers on Capitol Hill, which is why Democrats are packing up their offices and heading for the doors rather than seek re-election to return in the minority. This week, Rep. Bobby Rush (D-Ill.) became the 24th Democrat to announce he is not running again, The New York Post reported.

The GOP needs a net win of six House seats to take back the majority, and polls show self-identified Independents give the GOP a double-digit lead over Democrats, the Post said.

Curnutte says Democrats really think Jan. 6 is a “winning issue” for them but, outside the “bubble” of Washington, D.C., she says, people do not agree and have moved on to more real-life problems.

“They're focused on things,” she says, “like feeding their family, putting food on the kitchen table, and paying their heating bills."

Huckabee: Personality aside, Trump's policies 'exactly what the country needed'

Republicans have their eyes set on winning more seats in this year's election, and one former governor thinks they have a good shot at doing just that.