New York City’s controversial Marxist mayor is leaving office at the stroke of midnight New Year’s Eve but is leaving behind proof-of-vaccination policies that are being blasted as Orwellian and evil in a struggling city where most have gotten The Jab.

And now an updated "Key to NYC" vaccination policy has kicked in restricting children as young as 5, too.

“There’s no forewarning, no discussion,” the leader of a business group complained to The New York Post. “No idea about whether it’s legal or who he expects to enforce it.”

The newest policy, which took effect Dec. 27, requires children ages 5-11 to show proof of vaccination to see a movie, and eat a burger or a slice of pizza at a restaurant. 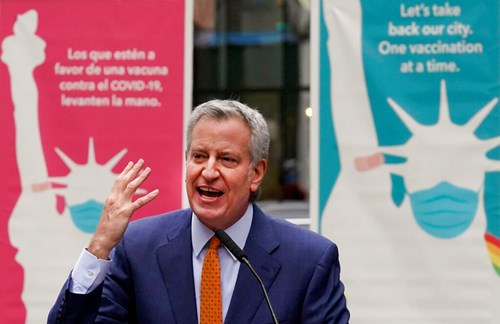 Regarding the jab-to-eat policy, now in its third month, café owner Tyler Hollinger told Fox News this week the city’s already-struggling hospitality industry is not the mayor’s vaccine police. And now comes the policy restricting children, too.

“I'm not going to bounce a five-year-old out of my establishment,” he said, “because they want to come in and have something to eat and drink after a long day in the city."

Hollinger went on to say it is "insane" to tell families and children spending money to travel and stay in New York City they cannot legally enter a restaurant.

Yet families are being told just that. Viral videos posted to social media show restaurant patrons, both adults and children, being booted by New York City police who are enforcing the vaxx policy. The NYPD is getting blasted, too, for a wall of blue uniforms booting the unvaccinated in a city overrun with crime.

According to the Post’s Dec. 6 story, 89% of adults in New York City had rolled up a sleeve for at least one shot. That number has likely jumped over the last few weeks, especially for New Yorkers who unwillingly did so to remain employed.

A conservative political pundit doesn't think anyone should be overly optimistic about Republican victories in the 2022 midterms.