Joe Biden's "Build Back Better" bill may be dead for now in the Senate, but that doesn't mean it won't be resurrected in the new year.

Senator Joe Manchin (D-West Virginia) made it clear in recent days that he cannot support Build Back Better. His decision is a blow to Democrats in that all of them are needed in the Senate to get legislation approved.

Lindsey Curnutte is press secretary of Heritage Action, the politically active arm of The Heritage Foundation. She credits the people of West Virginia for voicing their concerns to Manchin about the legislation, which she has dubbed "Build Back Broke."

"Manchin is no conservative – we know this [because] we've seen his voting record," she tells AFN. "He is, in fact, probably going to also push for some of these policies that we saw in Build Back Broke, probably next year."

Still, Curnutte says her organization is "excited" that Manchin appears to have listened to his constituents in West Virginia.

"[They] made their voice clear that they did not want this multitrillion-dollar bill that would kill their state's industries and worsen inflation," she points out. "So, we really see this as a grassroots win [for] these activists in West Virginia and across the country who called their senators, wrote op-eds, and worked really hard to make sure Americans and their senators knew the truth about [the bill]."

Democrats down … but not out

The Heritage Action spokeswoman sees it as a temporary win – because she expects the fight to start again in 2022.

"We saw Majority Leader Chuck Schumer's letter that says they're looking to push voting rights legislation and get around the filibuster in some ways to make sure they stay in power and they can pass through their liberal priorities," she shares.

Curnutte is concerned that some moderate Republicans may vote for parts of the bill next time around.

"If they do, in fact, decide to piece up this legislation, we're probably going to be concerned about that Child Tax Credit bit and maybe some other policies that they're going to try to pitch as more moderate," she warns – arguing that Democrats typically take that approach.

"… They're going to piece up this bill and try to attach different policies to different bills throughout the next year," she continues. "So, we've got to still recognize that strategy – and I think we have to make sure moderate Republicans see that strategy as well and … fight against the Left's strategy here to have a piece-meal approach … because, at the end of the day, it's still those liberal policies getting into law."

A blunder for Dems

Rob Chambers, vice president of AFA Action, says the attempt to pass the liberal, massive spending bill to wrap up the calendar year turned out to be a bust for Democrats.

"Democrats had been wanting to advance this liberal agenda for several months now," he points out. "So, now at the midnight hour, before they break for Christmas, they were hoping that they could get this thing passed – and here comes Joe Manchin appearing on Fox News and dropping the bombshell that he's not going to go with Biden's BBB. It's a Democratic blunder."

Chambers predicts the Democrats will pay dearly for their actions come November 2022.

"I would predict a shellacking [in the midterms], assuming there's not a big steal taking place in the election," he shares. "They see the writing on the wall – and that's why they're so desperate to try to get anything passed; [they're] trying to do whatever they can to advance as much radical leftist agenda as they possibly can – and they're failing." 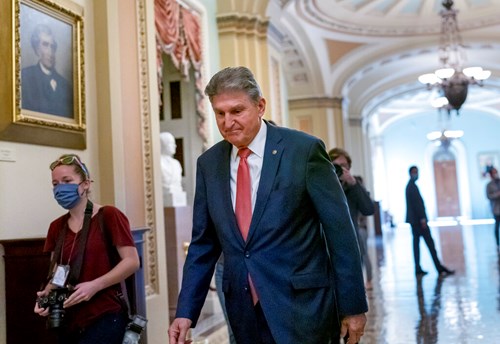 He's not making any friends on the Left

White House staffers, Senator Bernie Sanders, and members of "The Squad" have all voiced frustrations over Manchin's decision to vote no.

"We knew he would do this," tweeted Squad member Rep. Alexandria Ocasio-Cortez (D-New York). Rep. Pramila Jayapal of Washington state, another leader of House progressives, said Manchin can no longer say "he is a man of his word."

Sen. Bernie Sanders, the independent from Vermont who chairs the Budget Committee, said on CNN: "If he doesn't have the courage to do the right thing for the working families of West Virginia and America, let him vote no in front of the whole world."

Can Cheney be trusted?

A conservative political activist has concerns about Liz Cheney accepting an award from a group whose purpose is to gain influence among elected officials in the United States for the benefit of China.