It was as predictable as water is wet: The deadly tornadoes that tore through several U.S. states last week are being blamed on man-made climate change, a claim which really means mankind is being blamed for the bodies that are being recovered from miles and miles of rubble.

“This is going to be our new normal,” FEMA director Deanne Criswell, referring to terrible scenes of damage, told CNN hours after the natural disaster. “The effects we are seeing from climate change are the crisis of our generation.”

Such claims could be blamed on the sheer magnitude of the twister, which likely broke a record for the longest-ever tornado, but the American public is witnessing climate-change believers rush to the media and proclaim every headline-making natural disaster can be traced to mankind selfishly heating up earth’s atmosphere with fossil fuels.

Responding to the deadly tornadoes, climate change researcher Michael Mann told far-left news outlet Democracy Now! that the planet is being hit by wild fires, by droughts, by floods, and by heat waves.

By that logic, if a Midwest farmer watches his corn crop dry up from drought, or get flooded by torrential rains, climate change caused both. 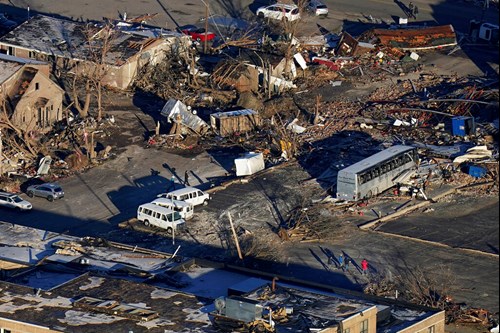 According to The New York Post, the Dec. 10 storm is being called the “Quad-State Tornado” after hitting Arkansas, Missouri, Tennessee, and Kentucky. If it did rip through 230 miles in those four states, it would break the record for the longest twister in U.S. history.

Gary Bauer, who leads the Campaign for Working Families, tells American Family News the public is not fooled anymore by the Left’s attempt to hijack science for their own socialist agenda.

“They are turning science,” he says, “into another politicized area that they can use as a club to beat their political opponents over the head with.”

Despite that constant drumbeat of climate change, Bauer says he noticed the liberal Washington Post braved the left-wing narrative with a story debunking it. According to the story, the link between tornadoes and climate change is, in the words of the Post, "just not there.”

Such skepticism is considered blasphemous “denialism” by Mann and others, who insist such beliefs are endangering human beings and should therefore should not be allowed in public.

“The denial of climate change,” he told Democracy Now!, “is deadlier than the basic science behind COVID-19.”

Californians who still remain in their once-great state are being told to follow yet another edict: Drop your egg shells and banana peels in a composting bin or face a possible fine for failing to do so.