Biden made political push for better 'perception' in crumbling country

President Joe Biden addresses the nation about the evacuation of Americans and Afghan allies from the Kabul airport in Afghanistan.

President Joe Biden appears to be safe from impeachment over the Afghanistan debacle, at least for now, but the defensive and defiant Commander in Chief is now facing accusations of backdoor arm-twisting and public deceit after his July phone call with Afghan’s president was leaked to the media.

London-based wire service Reuters obtained a transcript of Biden’s phone call with Ashraf Ghani, the now-departed Afghan leader. In the call, Biden states there is a belief the Afghan military is losing to the Taliban. He then asks Ghani to change that perception by defending well-populated areas and by holding a press conference with other prominent Afghan leaders who publicly back that strategy.

The now-public phone call comes after Biden has blamed President Trump and Afghanistan’s fleeing army for the frantic and violent evacuation of Americans and Afghan allies in the capital city, which was easily captured by the Taliban during the weekend of August 14.

In an August 19 interview with ABC News, which was taped five days after Kabul fell, Biden claimed the “intelligence community did not say back in June or July that, in fact, this was gonna collapse like it did.”

“They thought the Taliban would take over, but not this quickly?” George Stephanopoulos pressed.

“But not this quickly,” Biden replied. “Not even close.”

Yet the Taliban was surrounding the Kabul airport three weeks after Biden’s phone call with Ghani, when the Afghan president described an "all-out offensive" against his retreating army. 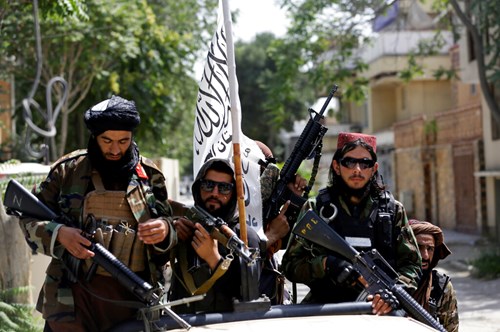 The partial transcript can be read here.

According to the transcript, Biden demanded the Afghan president improve the public perception that the Taliban was winning, when the Taliban already controlled half the country at the time, but that request was rejected by the Afghan president. Ghani instead described a “full-scale invasion” by Taliban fighters, who were backed by an estimated 15,000 foreign fighters, he said, and his country was also fighting military planning and logistical support from Pakistan’s government.

Responding to the transcript leak at the White House, press secretary Jen Psaki dodged a reporter’s question about it at the Wednesday press briefing.

“I'm not going to get into private, diplomatic conversations,” she replied, “or leaked transcripts of phone calls.”

For many people, the parallels between Biden’s phone call and President Trump’s 2019 phone call to Ukraine’s president are being revisited this week, especially after Democrats used it to impeach Trump in 2020 thanks to a whistleblower who told investigators the call was “frightening” to hear.

Republicans have not forgotten that Trump, in the phone call he was impeached for, asked Ukraine’s president to investigate Hunter Biden’s suspiciously corrupt involvement with the corrupt Burisma natural gas company, where he sat on the board of directors for five years.

National security analyst Bob Maginnis tells American Family News he is “not the least surprised” to witness people likening Biden’s phone call to Trump’s call to Ukraine’s president. Nor is he surprised some are demanding payback against the Democrats who impeached Trump for his leaked phone call.

“It seems to me that this certainly should have been revealed earlier,” he says, “and could be used for much the same argument to impeach Mr. Biden, especially given the outcome of this disastrous exit.”

In the first few moments of the July 23 phone call, Biden tells Ghani that the “perception” is that “things aren’t going well” in the fight against the Taliban.

“And there’s a need, whether it is true or not,” Biden continues, “there is a need to project a different picture.”

In a second Reuters story, published July 21, the wire service said U.S. generals were reporting the Taliban had captured half of the country's district centers and were "emboldened" by military wins to keep advancing.

Biden was just getting started on the issue of public perception, however. He then tells Ghani he should order the Afghan defense minister to build a strategy around holding “key parts” of the country’s population centers.

“You’re going to get not only more help,” Biden says of that strategy, referring to U.S. airstrikes, “but you’re going to get a perception that is going to change in terms of how, um, our allies and folks here in the States, and other places, think you’re doing.”

Regarding the public perception, Biden went on to say Afghanistan’s fate was “looking like a losing proposition” around the world. He then suggested the press conference with the Afghan leaders to “change perception” about the Taliban’s progress.

Is Newsom in trouble? Mad media suggests he is

A conservative activist predicts his fellow Californians will boot their Democratic governor from office in three weeks, a prediction backed up by a left-wing media that is frantic to prevent it.