Subscribe
As porous border gets overrun, rich cartels get richer

As porous border gets overrun, rich cartels get richer

The ruthless and rich drug cartels that control Mexico’s border with the United States are getting richer because of the Biden administration, warns an immigration watchdog that has monitored the U.S.-Mexico border for years.

“Who is getting all these folks to the border?” asks Ira Mehlman of the Federation for American Immigration Reform. “It is criminal cartels, the same cartels that smuggle drugs. They smuggle weapons to the United States. They traffic in human beings. This is a profitable business for them. They are making tons of money.”

Six months into the Biden administration, the U.S. border has experienced a surge of illegal aliens after the new president vowed to overturn Donald Trump’s get-tough border policies that were denounced by Democrats and far-left opens-borders groups as racist and “xenophobic.”

"I make no apologies for ending programs that did not exist before Trump became president that have an incredibly negative impact on the law, international law, as well as on human dignity,” Biden said in February at his first press conference.

This week, U.S. Customs and Border Patrol said it caught 180,034 illegal aliens during the month of May, the biggest number in a month since 2000.

The people apprehended came from Ecuador, Venezuela, Cuba, Haiti, and Africa nations, too. 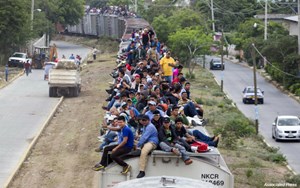 Regardless of their homeland, anyone approaching the U.S. border through Mexico is likely doing so with the permission of a cartel. In recent months, Border Patrol agents are catching illegals wearing color-coded bands with information, including their payment to the cartel.

The bands, which have not been seen before, are likely a way for the cartels to better keep track of the huge numbers of people paying them for a smuggling operation, the Border Patrol has told the media.

According to Mehlman, Mexico itself is suffering from U.S. immigration policy, too, because of the wealthy cartels.

“The government in Mexico is in a struggle for control of a lot of areas of the country with some of these criminal cartels,” he says. “[The cartels] are getting stronger as a result of this."

Abortion-defending liberals in Congress are putting all their cards on their table with a far-reaching abortion bill that would strike down state laws --- or attempt to --- if it becomes law with President Joe Biden's pen.