In a divided country and a split U.S. Senate, only two Democrat senators are keeping this nation from devolving into a Third World-like banana republic, warns a conservative columnist.

With fears growing of a Republican comeback in the 2022 midterm elections, the Democrat Party knows time is running out to move quickly with far-left plans to federalize elections, pass the Equality Act, and ram through a massive $2 trillion "infrastructure" bill which the GOP has pointed out spends very little on highways, roads, and bridges.

What is stopping Democrats is the Senate filibuster, and what is helping Republicans keep the filibuster is Sen. Joe Manchin of West Virginia and Sen. Krysten Sinema of Arizona.

“Right now the future of our self-governance is hanging by a thread,” observes Washington Times columnist Robert Knight, “and the thread happens to be Joe Manchin and Krysten Sinema.”

Knight’s description of two heroic senators runs counter to the left-wing version of the stand-off: Manchin and Sinema are enemies of democracy for refusing to cave. 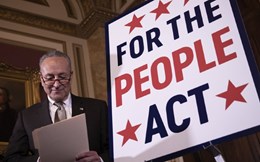 “If Manchin wants to reduce partisanship, as he says,” reads an op-ed by a former Capitol Hill aide, “he should not castrate the Senate’s ability to prevent the hyper-partisan Republican election abuses in one state after another, and support every hyper-partisan filibuster from Republicans who want to destroy the Biden presidency.”

“Sen. Joe Manchin is out to destroy democracy, LGBTQ+ rights,” reads the headline from The Advocate, a pro-homosexual newspaper.

In a June 6 comment on Twitter, a Daily Beast columnist says Democrats should bribe Manchin behind the scenes to win his support.

Regardless of who is in power in the 100-seat Senate, honest political analysts view the filibuster as a power-balancing tool, utilized by both parties when they are out of power, that prevents a slim majority from running roughshod over the minority.

The rich irony of Senate Democrats now opposing the filibuster is they used it during Donald Trump’s term to stop a funding bill for the Dept of Homeland Security, and to prevent Trump from rolling back Obama immigration policies, Politico reported in 2015.

“Democrats have always supported keeping the filibuster for legislation,” the story helpfully explains, “leaving it in place even when they gutted the 60-vote threshold on executive branch nominations in 2013.”

Six years later, what Democrats were using to stop Trump is now being described as a “tool of Jim Crow,” instead of a tool to stop the majority.

According to Knight, who has witnessed D.C politics for decades, Democrats know from the past they are in “big trouble” on Election Day because they have run too far to the left.

“They did it under Bill Clinton and they ended up with a Republican Congress,” he recalls. “This time around, unless they get rid of election integrity measures like voter ID laws, they're going to take a pasting at the polls in 2022."

A former leader of the GOP in Texas is excited that a predominantly Hispanic border town in a heavily Democrat-dominated area has elected a Republican mayor.