A protester in Beirut, Lebanon holds photos of Mahsa Amini, who was killed by Tehran's police, during an Oct. 2 protest. Protests across Iran, and the world, are now entering their third week.

Iran’s people are marching in the streets, where they are dodging bullets and braving torture and a prison cell, to protest the killing of a young woman by Tehran’s morality police, but a Christian activist says there is more going on than the death of one innocent person.

After news spread that police in Tehran had beaten 22-year-old Maysa Amini so badly she slipped in a coma and died, tens of thousands of Iranians have been protesting in the streets, risking arrest and torture at the hands of their own tyrannical government.

According to Faridi, he believes the estimate of 100 protesters killed so far is an accurate number. 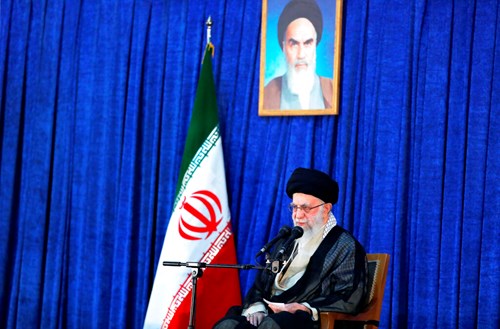 The protesters are marching with “empty hands” in the streets, he says, because there is no right to own firearms. So that means marchers are facing off against heavily-armed police and some are paying the ultimate price.

“They cannot fight back,” Faridi, a native of Iran, says of the unarmed protesters. “The government has shotguns. They have machine guns.”

The stark reality that Iran’s people are braving death makes video footage from their protests much more alarming and soul stirring. Thanks to the reach of social media, the rest of the world knows school girls across Iran are marching in protest, with their head coverings removed, in defiance of Iran’s strict Islamic laws.

In the first days of protests, cell phone footage showed a “morality” police officer beaten by a crowd after he struck a woman then stomped away to his motorbike.

“They want this wicked government, this evil Islamic government,” Faridi says of the brave protesters, “to leave them alone.”

Amini, who lived in the Kurdish town of Saqez, was visiting family in Tehran on Sept. 13 when morality police arrested her at a train station. Accounts differ if she was arrested for a loose hijab or for tight-fitting pants, but regardless she was taken away and the beatings began when she was placed in a police van.

A Beijing-run Taiwan: It would be desperate times for believers

The executive director of a group that exposes anti-Christian violence worldwide is warning if China should overtake Taiwan, the future of Christianity in the region will likely grow increasingly dim.