The lies that blind

It's not healthy when citizens automatically discount whatever the government or media tell them. That's what happens in totalitarian countries like North Korea, China or Venezuela.

We have this now in America, thanks to a ruling elite who lie ever more boldly. Girls can be boys. Men can be women. The border is secure. Inflation is all in your head. COVID will kill you unless you do exactly what we tell you to do. Socialism brings wealth and "equity" to all.

The COVID pandemic spawned a fountain of lies. The Centers for Disease Control, assisted by Big Tech, censored all alternative views. In the name of "science" they banned even honest questions. Facebook removed any posts that reasonably suggested the virus most likely came from a Wuhan, China lab that made viruses more lethal.

Ignoring the First Amendment, Biden officials ordered Big Tech to censor all COVID-related "disinformation." This included posts by credible doctors who said the vaccines did not prevent infection or transmission. The censorship continued even after CDC Director Rochelle Walensky admitted this. They also lied about masks, therapeutic treatments, and natural immunity and downplayed adverse reactions to the shots.

We're still told that healthy children, even babies, desperately need the vaccines, even though the virus poses no threat to them and never did.

We were informed that locking down the economy, closing schools and churches and quarantining healthy people was absolutely necessary. None of it was. It caused enormous damage, but it did help oust President Trump, whose roaring economy had him heading for re-election.

Today, monkeypox has health authorities reusing the "everybody is equally at risk" lie used in the 1980s AIDS epidemic among gay men. "We don't want to stigmatize sexual behavior," said the dean of public health at George Washington University. No, we wouldn't want to stop the raves or sex club parties.  That wouldn't be "inclusive."

"Anyone can get monkeypox," the American College Health Association stated, "so campuses should communicate it as a public health concern for all….it is important that communications convey compassion, reduce stigma and address equity."

But not offer sound advice to cease behavior that spreads the disease. Health czar Anthony Fauci used this song sheet during the 1980s, and he sang the same tune for COVID. He told gay men to keep doing whatever, just wear "protection" while doing it. Wink wink.

The BLM/Antifa riots that swept hundreds of cities in 2020? They were "mostly peaceful." Then there's the Russian collusion hoax, the phone call impeachment, "the most secure election in history" and the Jan. 6 Capitol riot being cast as an "insurrection." 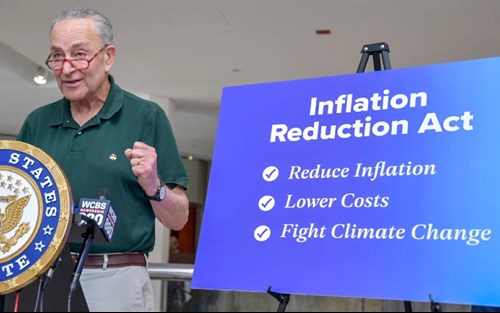 And so it goes. Remember when Joe Biden claimed that the Inflation Reduction Act wouldn't affect anyone making under $400,000? It was a lie. On a 51-to-50 vote, Democrats rejected a Republican amendment barring the Internal Revenue Service from auditing anyone making less than $400,000. Democrats have transformed the IRS into the Incredible Hulk, armed with 87,000 new agents and an $80 billion budget to wring dollars out of the middle class. Have we mentioned that Democrats insist they love the middle class? Yes. Like a glutton loves his lunch. (See related article)

How about the few Democrat senators talking tough on immigration? It's a lie. They pretended to support an amendment keeping Title 42, Mr. Trump's COVID policy allowing quick expulsion of illegal aliens. But it was a fake vote before the real one.

"Catch the trick?" the Wall Street Journal asked. "With a wave of their hands, six Senate Democrats gained the ability to tell constituents they voted for border security despite opposing the measure when it counted."

Confronted with bald-faced official lies, people do one of three things; they tune it all out, they get angry and fight back or they resort to dark humor. The latter can pose a real threat.

Twitter suspended the Bee for naming Rachel Levine, the trans Assistant Health and Human Services Secretary, as "Man of the Year." Twitter will reinstate The Bee only if it confesses to "hate speech," Mr. Dillon said, adding, "That's never going to happen."

This past week, the Bee took on the insanity of "affirming" children in whatever sexual identity they claim to be. Under "Health," the headline says: "Boston Children's Hospital Throws Child Off Roof After She Claims To Be A Bird."

After noting the injured child was being treated, "the hospital is standing by its decision to fling the child off the roof to affirm their right to flight."

A doctor explains, "Always affirm your child's felt needs, never correct or counsel them. If they want to fly, don't take their wings!"

The truth can sometimes hurt, but not as much as lies.

Conservative states have a warning for corporations that have “gone woke”: the consequences of political activism are no longer one-sided.