The election of a populist prime minister in Italy indicates a resurgent recognition that basic roles within societies – such as God, country, and family – must be protected … and that failure to do so is tantamount to national suicide.

This week, Italy prepared to welcome a new prime minister: 45-year-old Giorgia Meloni, leader of the right-wing Brothers of Italy party since 2014. Meloni is a populist conservative on issues ranging from marriage to immigration; she is a nationalist by philosophy and combatively passionate by temperament. A clip of a speech she gave at the World Congress of Families in 2019 has now gone viral with American conservatives; she explained:

This speech, according to much of the media, represented an indicator of incipient fascism in the land of Benito Mussolini. Never mind that former Italian prime minister Matteo Renzi scoffed at such a notion, calling the "risk of fascism … absolutely fake news." The Intercept promptly called Meloni the "latest fascist womanhood icon." Ishaan Tharoor of The Washington Post railed that she's "set to be her country's most ultra-nationalist premier since fascist dictator Benito Mussolini."

Meloni is merely the latest recipient of such treatment internationally.

What, precisely, is the common thread linking these disparate politicians across a wide variety of countries? After all, none of these politicians are remotely like Vladimir Putin or Xi Jinping; none of them preside over authoritarian states. In fact, left-wing politicians have engaged in far more intrusive antidemocratic measures over the past two years, from lockdowns to unilateral centralization of executive power. 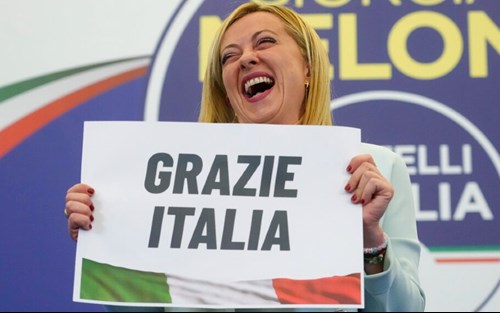 The common thread is precisely the themes embraced by Meloni (right): national pride and rejection of left-wing social values. The radical anti-traditionalism of the post-modernist Left, combined with the social apathy of centrists, has led to a serious international backlash. That backlash takes the form of a resurgent recognition that basic roles within societies must be protected, and that failure to do so is tantamount to national suicide.

And it is precisely that backlash that many in the media find so disquieting. To them, traditional roles are themselves fascist institutions; those who promote such roles suggest that human happiness can't be found in atomistic individualism, supplemented by collective social welfare schemes. And so true freedom requires that those like Meloni be fought.

Unfortunately for the Left, anti-traditionalism is the privilege of the frivolous – and after the failure of totalitarian COVID-19 policy, the collapse of green utopianism and the decay of societal solidarity, frivolity is no longer the order of the day. Which means that Meloni and those who agree with her are only the beginning.

It's true some conservatives seemed truly uncertain what to do following Roe's demise. However, the real story isn’t so much what the GOP can’t agree on, but what the Democrats do: unlimited abortion on demand through all nine months of pregnancy, up to (or after) birth.