As Beijing grows bolder seemingly every day, an invasion of Taiwan appears inevitable. The communist regime's recent military drills, says a former naval intelligence officer, were a "dress rehearsal" for such an attack.

Earlier this month, a statement from the Japanese Defense Ministry indicated that ballistic missiles were likely fired over Taiwan. While military drills by the People's Liberation Army (PLA) have escalated around Taiwan, this may be the first time that missiles were actually fired over the East Asian country.

Meng Xiangqing, a professor at National Defense University in Beijing, told China Central Television that the incident "can be seen as a clear signal to the Taiwan authorities that current drills have exceeded all previous ones in scale and deterrence."

Capt. James Fanell is a former director of intelligence and information operations for the U.S. Pacific Fleet. Pointing to the fact that Chinese fighter jets and warships have recently crossed the median line of the Taiwan Strait, he tells American Family News "the world has once again witnessed the true nature of the Chinese Communist Party."

Fanell describes President Xi Jinping's decision to fire missiles over the island of Taiwan, along with the deployment of naval and air forces across the centerline, as "yet another escalation on the strategic trendline of the People's Republic of China (PRC) finally conducting a full-scale invasion of Taiwan." According to the former naval officer, "the use of violent military force is being employed to assert their will, regardless of the consequences."

Twenty years ago, Fanell offers, it was "inconceivable that the PRC would ever conduct such a wanton act of aggression." But since then, he points out, "[there has been] a clear and consistent trendline pointing to the CCP finally deciding that they are fully capable of their planned invasion of Taiwan" using the resources of the People's Liberation Army.

"The PLA's invasion strategy is led by a Joint Fire Strike Campaign (JFSC) where ballistic missiles from the PLA Rocket Force would blanket key targets in Taiwan," Fanell explains. And those missile launches on August 4, he suggests, were a "dress rehearsal" for a future JFSC – which, he adds ominously, "increasingly looks like it could take place in the near term, within the next 18 months, before the U.S. presidential election in 2024."

The PLA, he adds, "will also use their cyber forces, along with robust electronic warfare, against Taiwan's military, as well as U.S. and Japanese forces."

Can Beijing be stopped?

According to Fanell, the PLA has planned for a "short, sharp war" to achieve the CCP's goals; one that does not allow enough time for the U.S. to mobilize its military to come to Taiwan's defense. Within a year or so, he expects the PRC to "increase the military presence of the PLA in and around Taiwan – maybe even conducting these kinds of provocative missile firings over Taiwan on a routine basis."

And should that happen, says Fanell, it will be for two purposes: "One, to break the will of the people of Taiwan; and two, to continue to refine the operational readiness and lethality of the PLA."

For Fanell, it begs the question: What can and should the U.S. do in response to this threat? 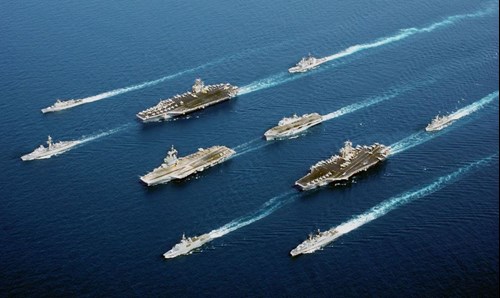 "First and foremost, the U.S. must dramatically increase its air and naval presence in the Western Pacific," he recommends; and to that end, he says there must be "a dramatic shift" of U.S. military forces from the Atlantic to the Pacific.

"The U.S. must also begin deployment of offensive missile systems that can fire and sink PLA naval and air forces," he contends. "[And] there must also be a dramatic increase in combined military operations with Taiwan's military."

Regarding the latter, some experts would suggest that combined military operations would provoke Beijing into an attack – but Fanell disagrees. He argues that because the CCP's ultimate goal is for Taiwan to surrender to the PRC through any means necessary, it makes no sense for Taiwan and the U.S. to unilaterally "tie their own hands" by not establishing a combined military command structure and begin to operationalize it for the defense of the island."

And the U.S. shouldn't go it alone, he states. A new "combined structure" should include other "allied military friends," says Fanell – like Japan, Australia, India, the U.K., France, Canada, South Korea … "and any other nations that choose to stand for freedom and liberty and against the totalitarianism of Communist China."

Members of Congress today received a multi-page memo from a group of "concerned service members" alleging illegal activities by the Department of Defense related to COVID inoculations and mandates.