A telecommunications expert warns that Communist China could be monitoring U.S. military installations via commercially installed high-resolution cameras that allow it to piece together the movements of military equipment.

A CNN exclusive recently reported that "around 2014, [cellular service provider] Viaero started mounting high-definition surveillance cameras on its towers to live-stream weather and traffic, a public service it shared with local news organizations." Viaero typically provides data and mobile voice coverage for rural markets in Colorado, Kansas, Nebraska, and Wyoming (see image above from camera in Alliance, Nebraska). The cameras the company used were reportedly being used to monitor traffic and weather.

"But," according to CNN, "they were also inadvertently capturing the movement of U.S. military equipment and personnel, giving Beijing – or anyone for that matter – the ability to track the pattern of activity between a series of closely guarded military facilities."

American Family News spoke to Jon Pelson, a telecommunications expert and author who admits he was initially skeptical when intel sources told him hi-res video cameras were being mounted on the top of cell towers near some of the country's most sensitive military bases. But he quickly recognized what he describes as "the brilliance of China's moves" to deploy such equipment in those locations. Cameras to monitor weather, even warn of oncoming tornados, are not illegal or innocuous, he points out.

"But the problem here," Pelson says, "is that [via those cameras] you can see past the highway and look at trucks, planes, helicopters, and deliveries [at military installations]" – creating, the telecom expert suggests, "a way for someone who has an interest in accumulating data and information to now get that very securely and very reliably."

According to Pelson, the intelligence community has determined that China has been watching the publicly posted live-streams.

"As anyone in the intel services would say, a really good agency takes lots and lots of seemingly trivial, unimportant worthless pieces of data and knits them together to tell a story that's really useful to them," he points out.

He explains, for example, what can be derived simply by watching delivery trucks arriving at a military base. "If they know that something is being made somewhere else, and they're trying to figure out where it's going, they can look different bases and see when delivery trucks show up," he continues.

"And [that's] one little brick in a wall – one that could be discarded as meaningless and worthless," the author acknowledges, "but the Chinese regime remains focused on the larger picture."

Part of the problem, he adds, is that the U.S. still sees China as a trading partner or customer, or as a rival. "But they see us as an enemy," Pelson states, "[and] this is allowing the Chinese regime to do something that's helpful for their intelligence service."

The opposite arrangement, he concludes, would never happen. "Can you imagine China allowing a U.S. company to deploy monitoring and listening equipment near their military bases deep in the heart of China?" he asks. "Yet, the U.S. allows it because we're an open, trusting society." 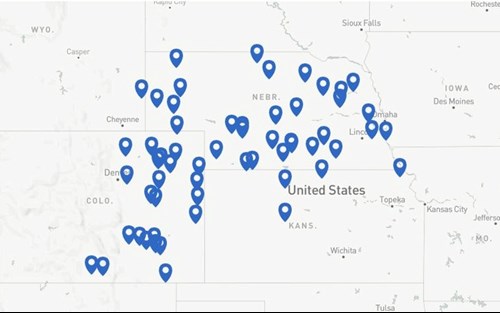 According to a publicly available image on the Viaero website (right), the cellular service provider has nearly 60 operational cameras in Colorado and Nebraska alone. (Click on image for larger version)

Jon Pelson is author of "Wireless Wars: China's Dangerous Domination of 5G and How We're Fighting Back."

Beijing the bully may show up in South China Sea: Lippold

In the wake of Nancy Pelosi's visit yesterday to Taiwan, a military analyst and terrorism expert believes Communist China is prepared to use its growing navy to attempt to restrict America's free access to sea lanes.