Pentagon stays woke but can't wake up to recruiting woes

The diverse and inclusive U.S. armed forces has a recruiting problem, meaning the military branches can’t find people willing to wear the uniform, and a military watchdog says wokeness is pushing good people out and keeping good people out.

In the U.S. Army, the largest service, recruiters who are already good at what they do can now wave $50,000 enlistment bonuses for some military occupational specialties, but even that eye-catching stack of cash isn’t doing the job. When the 2022 fiscal year ends in September, the Army expects it will hit 40% of its recruitment goal for the year.

To many who are non-woke but fully awake, the recruitment problem is no surprise and a no-brainer. 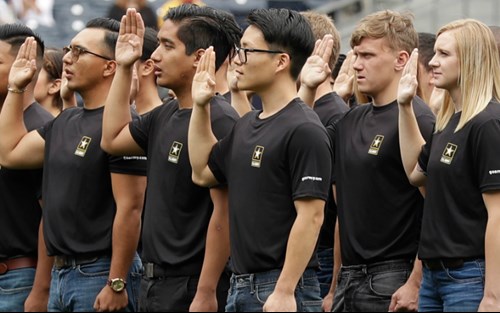 “Traditional, patriotic families are the prime ‘market’ for military recruiting,” Elaine Donnelly writes in an op-ed for The Federalist. “Pentagon officials and professional marketers, therefore, should objectively consider whether woke Defense Department policies have alienated that core constituency.”

It appears, however, that self-analysis won't happen anytime soon. When the calendar rolled to June, and to Pride Month, the services tripped over their stiletto high heels to show they were embracing homosexuals, lesbians, and transgenders. Among the groveling behavior, the Twitter account for U.S. Air Force Recruiting tweeted a photo of cadets marching with a “pride” flag. Back in March, the Air Force celebrated “Transgender Day of Visibility.”

That recruitment photo generated public comments for several reasons: Absent in the photo was any sign that Old Glory was flying, too. Another issue is the irony of sweaty, hard-running cadets pictured in a recruitment photo considering the Air Force revised its physical standards in 2021 to allow walking to finish the mandatory 1.5-mile course. 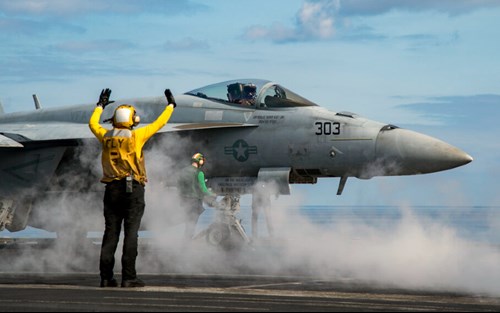 In the U.S. Navy, where homosexuality is already as common as ocean water, that branch lectured its sailors about proper pronoun usage in a bizarre video that looks, sounds, and feels like a PBS kids show.

“Using the right pronouns is a really simple way to affirm someone’s identity,” one of the co-hosts states. “It is a signal of acceptance and respect.”

In 2020, a massive fire on the USS Bonhomme Richard was started by a sailor. The ship-destroying fire, which burned for five days, was ultimately blamed on three dozen officers and sailors who failed to train and prepare properly, maintain equipment, and coordinate and communicate well during the blaze.

Meanwhile, the Navy lost an FA-18 Super Hornet fighter jet earlier this month that was not secured to the deck of the USS Harry S. Truman. The accident was blamed on bad weather in rough seas.

"The classes on securing our fighter jets to the deck are just gonna have to wait until we’re gay enough," Jesse Kelly, the Texas-based radio host, stated in a Twitter post.

Much like Donnelly does with the Center for Military Readiness, Kelly, a U.S. Marine veteran, frequently warns the public the U.S. military will "lose a major war" because it is not fulfilling its role, which is to find and kill our enemy.

Even the famously tough Marine Corps, which fought the Pentagon (and lost) to keep women out of its combat units, acknowledged Pride Month with a combat helmet adorned with rainbow-colored bullets.

In an interview with AFN, Donnelly says the blame falls on the Biden administration for allowing “anti-recruiting” messages that potential recruits oppose.

“I don't think they even realize what kind of messages they're sending to parents,” she says, “when they keep pushing woke agenda items that turn away families.”

Jihadists and martyrs – Hezbollah investing in its future

Recent reports by an Israeli nonprofit showcase the dangers of terrorist organizations like Hezbollah, whose "education" activities play into the hands of extremism in Lebanon.