Canada’s recruit-challenged armed forces will be filled with green-haired, tattooed recruits thanks to a permissive dress code, which may or may not help recruiting efforts but, regardless of the outcome, reveals the sad state of a nation taking wokeness to a whole new level.

Starting in September, everything from face tattoos and long hair to eyelash extensions will pass scrutiny with a Canadian Armed Forces recruiter, National Post reports in a saddening story that said men training for war can be issued skirts, nylon stockings, and purses. 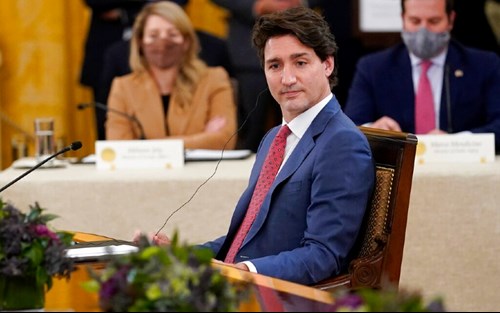 With a Regular Force of that size, Canada failed to make a top ten U.S. News ranking of the biggest NATO members; Romania fell in tenth place. But Canada’s top military official announced last week the country is “leading the way” with the loosened dress codes for military service, the Post story said.

NATO members including the United States have also loosened standards to the point that men can wear clear nail polish, the Post story points out, but the Canadian Armed Forces seems determined to outdo its allies in a race to be more inclusive and welcoming.

“Trudeau is an anti-war ignorant man,” Rushfeldt complains, “who has no interest in defending Canada against any outside forces.”

It has not always been this way. During the D-Day invasion, about 14,000 infantry troops landed on Juno Beach in Normandy, France. Another 450 paratroopers dropped behind enemy lines. By the end of World War II, more than 1 million Canadians had fought in the war, with approximately 42,000 killed and 55,000 wounded.

Today, an armed forces estimated to be 100,000, including Reserve forces, is tasked with protecting a population of 38 million and with guarding territory, from the Gulf of Alaska to the North Atlantic, that is the second-largest land mass in the world.

Russia's war with Ukraine has forced Canada to promise NATO it will increase its military spending. Last month, Trudeau signed an agreement with Latvia to beef up a battlegroup that currently includes 700 Canadian troops, CTV News reported.

Canada's Liberal Party, which Trudeau leads, opposes increasing national defense spending to two percent to help NATO, the story said. That spending will actually fall this year as a share of GDP.

Listen up, folks – the Chinese threat is not to be ignored

The Biden administration is being advised to take seriously a recent warning about the People's Republic of China: that the communist regime poses a long-term, existential threat to the West – and especially to the United States.