Subscribe
Taiwan and China counting days to eventual invasion, too

Taiwan and China counting days to eventual invasion, too

Taiwanese fighter jets taxi on a runway during military drills on the island nation.

China’s communist leaders are not pleased the U.S. and Taiwan are comparing China’s non-secret plans for eventually ruling the independent island nation but a retired U.S. Army general predicts Taiwan will prove to be a determined and capable enemy if China ever follows through with its invasion plans.

While the war in Ukraine drags on, China last week accused U.S. and Taiwanese officials of "playing with fire" over comparisons to Russia’s invasion of independent Ukraine, Fox News reported.

A spokesman for the Chinese government described a “new wave of tensions” and said the “root cause” is Taiwan officials pushing an “independence agenda” with help from the U.S.

Taiwan, a mostly mountainous island 245 miles long, is home to approximately 23 million citizens. The government there traces its history to 1949 after communists led by Mao Zedong defeated the nationalists led by Chiang Kai-shek during a bloody civil war. 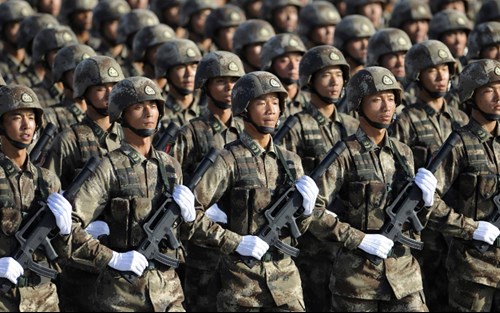 The breakaway nation is considered to be an outlaw government by the Chinese Communist Party, which has vowed to recapture it, and many nations around the world have capitulated to that authoritarian view known as the “One China” policy.

Asked for his views about a future invasion, Lt. General Jerry Boykin (Ret). predicts the Chinese generals will be surprised when the “determined” Taiwanese fight back and prove to be a tough foe.

“Plus, the Chinese have some problems of their own,” he advises. “First of all, the waters off of Taiwan have some anomalies in there that make amphibious landings a bit trickier.”

With about 100 miles separating China’s mainland from Taiwan, the Taiwanese Navy commissioned two minelaying ships in January to improve the island's maritime defenses. Both ships were designed and built on the island, The Defense Post reported.

A second looming problem for China, Boykin says, is known as “power projection capabilities,” which is the ability for a fast-moving military force to deploy and sustain combat operations. China’s military has never had that capability, he says, and a military invasion will test its ability to do so.

Military analysts have said Russia's army suffered from that logistics problem in Ukraine, where Russian trucks and armor ran out of fuel and soldiers went hungry.

Regarding the U.S. helping Taiwan, Boykin says the U.S. must continue to sell military equipment and supplies, or even donate them, to the island nation.

“Give them the military means,” he says, “for them to put up a good fight."

Effectiveness of guv's 'innovative' border plan remains to be seen

A border enforcement advocate likes the way the governor of Texas has turned to innovative ideas to defend the southern border when President Joe Biden won't.