Subscribe
If indeed Putin is 'insane,' be very careful: Bauer

If indeed Putin is 'insane,' be very careful: Bauer

A conservative activist is praising the president of Ukraine for the impassioned address he made to a joint session of the U.S. Congress. But he's warning that America's decision-makers must be careful not to make any miscalculations in dealing with Vladimir Putin.

Ukrainian President Volodymyr Zelenskyy cited Pearl Harbor and the terror attacks of September 11, 2001 on Wednesday as he appealed to the U.S. Congress to do more to help Ukraine's fight against Russia. The Ukrainian leader said the U.S. must sanction Russian lawmakers and block imports, and he showed the packed auditorium of lawmakers an emotional video of the destruction and devastation his country has suffered in the war.

Gary Bauer of the Campaign for Working Families admits he's concerned about potential escalation – as are many other Americans.

"We should help the Ukrainians – but I am praying regularly that our leaders at all levels are keeping in mind that a miscalculation here could end up killing millions of people," Bauer tells AFN. "And I'm a little concerned that in this war atmosphere, that not enough attention is being paid to that possibility."

He also offers a warning when dealing with the Russian leader. "I'm hearing a lot of commentators who say that Putin is insane, that nobody can figure out what he'll do next," Bauer notes. "Well, if that's true then we need to be very careful because Putin has thousands of nuclear-armed missiles aimed at American cities."

Bob Maginnis, a senior fellow for national security at the Family Research Council, says despite being outgunned "it's incredible" what the Ukrainians have been able to do against the Russians.

"We can arm [the Ukrainians]. We've spent years training them on Javelins and Stingers and combat operations and … they're doing well, quite frankly. They've got the Russians on their heels. The Russians are doing terrible against Ukrainians," Maginnis tells AFN.

"But the Russians outgun them," he continues. "They have the armaments, and they've made some headway. [But in many ways] this is almost like a David and Goliath type of fight – and I do believe David could win."

President Joe Biden announced yesterday that his administration is sending $800 million in additional military assistance to Ukraine. Some observers say the Ukrainians' dedicated and, thus far, effective defense of their homeland is sending a message to Russia's ally, China, that invading a sovereign nation can be costly in terms of human life and treasure. But Bauer doesn't think the Chinese will be deterred by events in Ukraine.

"It's sort of remarkable [that] there were some U.S. generals and analysts up on Capitol Hill testifying earlier this week that their view was that the Chinese Communist government may now be worried about 'reputational damage' to them because it's perceived that they're on the side of Russia. Reputational damage? What reputation?" he wonders. 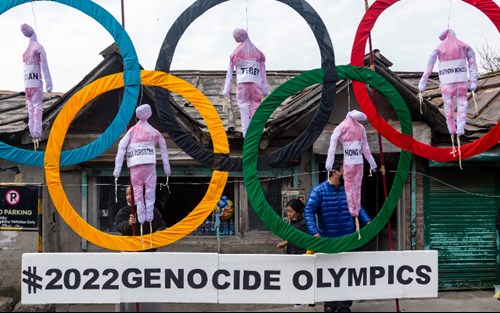 Bauer points out the Beijing regime, which just hosted the 2022 Winter Olympics, has been labeled by the Trump administration and even by the Biden administration as conducting "genocide" against the Uyghurs, one of the ethic religious groups in that country.

"They literally have people in concentration camps," Bauer begins as he ticks off other examples. "The Chinese Communists have just smothered any hope of freedom in Hong Kong. They're making territorial claims on a half-dozen different nations in the Pacific Rim. They have threatened the United States regularly."

Make no mistake, Bauer concludes, that China, Russia, Iran and North Korea are all working together to undermine the free nations of the world. "And eventually we will have to deal with all of them," he warns.

"[But] I see in the White House today a president and, even in some ways, a worse vice president who are not up to the task," Bauer laments.

'No sympathy' for cadets who showed poor judgment

A national defense analyst says the cadets who demonstrated poor judgment during Spring Break deserve to be expelled from West Point.