He was flagged by feds' terrorist watch list, then released – Say what?

It's certainly something to be concerned about, says a national security expert: A terrorist suspect crosses America's southern border illegally and gets apprehended – but soon walks free, setting up residence in the upper Midwest.

In late November 2021, Issam Bazzi – a 50-year-old Lebanon-born Venezuelan and suspected terrorist – swam across the Rio Grande River to Brownsville, Texas, where he was caught by federal authorities. Todd Bensman, senior national security fellow at the Center for Immigration Studies (CIS), describes the event to American Family News.

“[Bazzi] is among a sharply increasing number of Venezuelans crossing the border,” Bensman begins – then explains that what makes the incident involving Bazzi important to him is the fact that the Venezuelan “flagged on the FBI’s terrorism watch list.”

At the very least, suggests the national security expert, one would suspect Bazzi would have been detained and/or deported. But that wasn't the case.

“Immigration and Customs Enforcement (ICE) headquarters in Washington, DC, intervened on Bazzi’s behalf and ordered him released over the FBI’s objections,” Bensman informs.

Border security is 'off the rails'

The CIS fellow became aware of the Bazzi incident through former New York Times writer and Pulitzer Prize winner Charlie LeDuff, who reported the story for Deadline Detroit last month. In his story, LeDuff explains the rationale behind Bazzi's release, according to immigration documents:

"… Officials from the Department of Homeland Security ordered his release. One of the mitigating factors, according to those documents, was that Bazzi had a precondition that made him highly susceptible to Covid-19. That precondition: Bazzi is overweight."

Bensman points out that no one has disputed or challenged LeDuff’s story – which he finds alarming because the recently retired chief of Border Patrol, Rodney Scott, indicated 14 noncitizens on the terror watchlist attempted to enter the United States between October 2020 and August 2021. 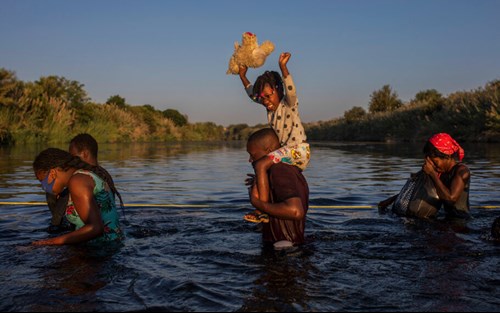 “Against the thousands and thousands of people who cross the border and are apprehended every month, that’s not a lot – but it points to a larger issue,” the senior national security fellow warns. “It only takes a few terrorists to cause very, very outsized consequences – [just as] it only took 19 hijackers to send America to war for 20 years in Afghanistan."

And if the facts of the case hold true, Bazzi’s release would be a "striking departure" from any normal security arrangements that Border Patrol or law enforcement would typically have at the border, says Bensman.

“With the mass migration crisis the country is witnessing at the border,” he adds, “all normal systems to manage the border are out of whack. [They are] just completely off the rails.”

He admits that concerns him because of the potential it suggests for the number of dangerous individuals, including terrorists, who could ultimately surface in the United States.

Todd Bensman is author of "America’s Covert Border War: The Untold Story of the Nation’s Battle to Prevent Jihadist Infiltration.”

An immigration reform organization says the last thing America needs is for legislators to push a bill that could open the door for more spies from the People's Republic of China to come to the United States – but that what House Democrats have done.