President Joe Biden is being blasted for showing weak leadership during the botched evacuation of U.S. citizens and Afghan allies from Afghanistan.

America is facing two serious problems at once, says a military analyst and retired U.S. Navy officer: a failure of leadership at the highest levels of American government and dangerous foreign enemies who are well aware we are weak and vulnerable.

Outrage over the Biden administration’s catastrophe in Afghanistan has reached a fever pitch, with the list of frustrated and angry critics growing after 13 U.S. servicemembers were killed by suicide bombers. That list includes Kirk Lippold, who was commanding the USS Cole in 2000 when al-Qaeda terrorists bombed the guided missile destroyer while it was docked in Yemen. The attack killed 17 U.S. Navy sailors.

At the same time, the military veteran warns, America is facing “existential threats” from China and Russia, and Iran meanwhile is moving closer to obtaining a nuclear weapon.

“And yet what do they want to do? Let's spend $3.5 trillion on Democrat priorities,” Lippold says, referring to the Democrat-passed infrastructure bill, “and still keep our nation vulnerable to a future that is unpredictable because the threats are not being addressed."

In a radio interview on American Family Radio, longtime conservative activist Gary Bauer pointed out that America went all day Thursday without hearing from their President. That was because, Bauer said, Biden was desperately rehearsing for an afternoon speech. When it was over, the tough-sounding warning rang hollow in the ears of America’s enemies who are watching Biden's fumbling in Kabul. 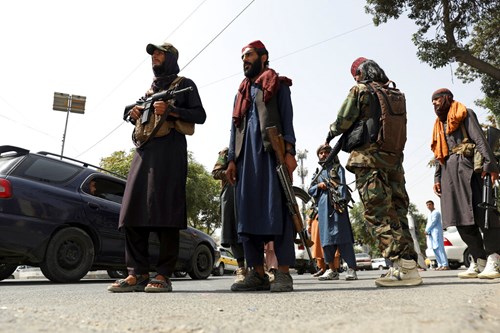 “After he drops 5,000 troops into the middle of an airport, in a city controlled by our enemy,” Bauer said, “and gives the Taliban the ability to secure the perimeter of the airport and gets to decide who gets to approach the airport.”

During the interview, fill-in show host Fred Jackson pointed out that news outlets are reporting the U.S. government has handed over a list of U.S. citizens and Afghan allies to the Taliban, depending on the terrorist group to help get them through their checkpoints around the airport.

That alarming claim was first reported by Politico. Biden was asked about it Thursday and did not deny it was true.

Bauer said he heard that alarming news story, too, and immediately wondered who in the administration had been so “stupid” to do that.

“I don’t think you can be this stupid,” Bauer concluded. “So then I have to ask myself why would these kinds of horrible mistakes be made. I have to believe that there’s some agenda here that we don’t quite discern yet.”

The overwhelmed U.S.-Mexico border includes hundreds of thousands of illegal aliens who use a bogus asylum claim to gain entry into the United States, where they disappear into the interior, and now the Biden administration wants to make that abused process even easier.