A retired U.S. Army general who served in Afghanistan says Americans should be proud of their military’s service and sacrifice there – but he predicts the Taliban will soon take a victory lap in that country.

On Thursday, Fox News reported a "grim end" to the war in Afghanistan with White House press secretary Jen Psaki stating: "We're not going to have a mission-accomplished moment in this regard." And with 90% of U.S. troops already pulled from the South Asian country, President Joe Biden said remaining U.S. military operations will cease on August 31.

Now – just one day after Biden defended his troop withdrawal – Taliban officials are announcing they've taken control of 85% of territory in Afghanistan.

Despite the continued rhetoric about a peaceful Afghanistan in the months following the so-called peace deal, Schloesser (pictured above) tells One News Now that the Taliban has neither the need for nor the interest in conducting any sort of negotiation with the legitimate government of Afghanistan.

In February 2020, the Trump administration signed the formal agreement between the U.S. and the Taliban that led to the subsequent withdrawal of U.S. troops and NATO allies. But since then, the general points out, "the Taliban have been able to regain ground through military means, fighting against the Afghan army and thereby largely defeating [the Afghans] wherever they are engaging in significant combat."

In contrast, Biden said in his address to the nation Thursday that "[he trusts] the capacity of the Afghan military, who is better trained, better equipped and more competent in terms of conducting war."

Schloesser takes exception to the president's assessment, admitting he doesn't have much hope that the Taliban can be confined to rural areas and that the Afghan government and its allies can maintain control of major cities.

While he is assured the Afghan army is doing the best it can in combat, Schloesser finds what's actually being witnessed across the country "very concerning." Afghanistan is quickly falling into the hands of the Taliban – and the general predicts "a [rapid] collapse of the Afghan army" in a matter of months, perhaps across the entire country or across the major cities.

"[Either way]," he says, "the Taliban are going to regain militarily the control of the larger part of the country."

And this, he warns, places the United States and its national interests into quite a predicament.

"[Afghanistan] will essentially become a safe haven [for terrorists], recreated for those that are linked to the Taliban and [others] wanting to have an area to operate and train from," he describes. "Al Qaeda will regain strength in Afghanistan, [and] the Islamic State will try to set a foothold [within the country] bigger than what it has had in the past."

The result? A "grim picture" that appears unavoidable, according to Schloesser. 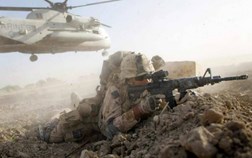 Schloesser: Grateful for their service and sacrifice

Despite the grim picture, the retired Army officer is thankful for the service of each member of the U.S. armed forces, particularly for those who did not come home alive and for their families.

"To all Americans, since 9/11 – since [U.S. forces] have gone to Afghanistan to defeat Al Qaeda and push the Taliban out – there has not been a direct attack of any significance on our country from Al Qaeda or from obviously any linked groups," he praises.

"The honorable service that soldiers, sailors, airmen, and Marines provided in [Afghanistan] was immeasurably critical to the security of the United States of America for the last two decades." Thousands of men and women fought with honor, the general notes – adding "there’s something very special about that."

While predicting that it's only a short time before the Taliban fully control Afghanistan, Schloesser urges Americans "to be thinking long-term – and realistically, it’s a matter of a few years."

And he wonders what the U.S. will do once Afghanistan returns to being a safe haven for terrorists.

"Can [the United States] be effective from afar?" he asks. "In just a few years, [the U.S.] could once again either be attacked, or planned to be attacked, on the level of another 9/11."

As the U.S. Border Patrol hopes to hold onto funding to do the important job of securing America’s border, cartels are gaining power under a Mexican president who may be turning a blind eye.