A Chinese "spy catcher" may have made his first public appearance since rumors of his defection to the United States. True or not, one expert reveals there's a growing turmoil within the Chinese Communist Party.

Beijing recently released a photograph claiming to show a high-ranking Chinese "spymaster" in Shanghai, but this official has been rumored to have defected to the U.S. in February with evidence about the origins of coronavirus – i.e., a lab leak from the Wuhan Institute of Virology (see related story).

While some argue the image has been photoshopped in an attempt to dispel rumors of defection, the purported photo shows Dong Jingwei's presence at the 16th meeting of the Security Council Secretaries of the Shanghai Cooperation Organization Member States on June 23. Since 2018, he has served as China's vice minister of the Ministry of State Security.

Gordon Chang is a columnist and attorney who appears regularly on Fox News to discuss issues related to China and the Far East. In an interview with One News Now, Chang – the author of "The Coming Collapse of China" – addresses the unfolding story about the Chinese defector.

"There have been rumors about [Jingwei's defection] for months," Chang points out. "These rumors could have been put to rest when Beijing released a photo of him at the conference." But erring on the side of caution, Chang is open to considering that the photograph is authentic until evidence proves it is not.

According to Chang, a number of defections have been rumored in the last six months – indicating, he says, "something is quite wrong in Beijing." He explains that rumors of defections don't occur unless there is a problem within in a regime – and whether the rumors hold true or not, "it means people are trying to destabilize the ruling group," he adds.

China, Chang suggests, could be in panic mode, as Jingwei would have access to vast amounts of important information. As China's top counter-intelligence chief, Jingwei would be able to reveal China's efforts to penetrate American intelligence operations in China, and elsewhere.

"This would be an intelligence windfall for [the United States] if he defected," Chang tells One News Now.

Chang is convinced that if Jingwei's defection is a reality, it spells major trouble for the Chinese regime. Not only could it sever the relationship between the U.S. and China, the China expert says it could actually be disastrous for the Communist Party. 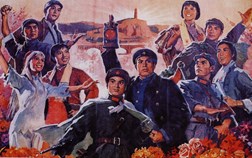 According to the author and columnist, there have been a number of times in the history of the People's Republic when senior leaders have "squabbled among themselves and almost brought the Communist Party down."

As Chang told Newsmax, Jingwei's defection – if true – would "blow open" the political system in Beijing because President Xi Jinping would be blamed for it, and there could be a "new ruler overnight."

Pull back the cover-up: COVID was bioweapon, expert argues