Albert Bourla, CEO of Pfizer, speaks to the media about the corporation's business success at an October 2021 press conference.

Mega-corporation Pfizer is projected to make more than $30 billion in revenue by year’s end from its COVID-19 shot, and the boss who is in charge of that revenue stream is making headlines for suggesting vaccine critics are worse than just bad people spreading false information.

Bourla, who was named Pfizer’s CEO in 2018, spoke Nov. 9 to an Atlantic Council gathering where he was interviewed by the Council’s CEO about researching and developing the vaccine, and his predictions for a future in which the virus is behind us.

That interview can be read on the Atlantic Council website here.

Bourla, who attended to get a leadership award from the Council, recounted how researchers chose to use unproven mRNA technology to create a vaccine for the virus, and the Pfizer boss also predicted the world would get beyond the virus if a majority of people were vaccinated. He also suggested, minutes later, that an annual shot would be necessary.

“It looks like there is a chance that this will become an annual revaccination,” the Pfizer CEO said of the controversial shot that now requires a "booster" because it is proving to lose its potency after six months.

Back in September, two senior Food and Drug Administration officials resigned in protest because the Biden administration was pushing for boosters despite FDA approval. There was also frustration from a vaccine advisory panel at the CDC that refused to recommend them. 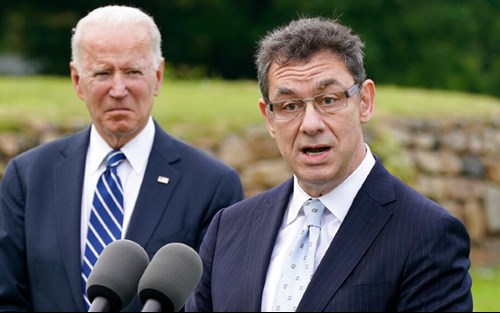 In an earnings forecast, Pfizer reports it will close 2021 with $81 billion revenue of which vaccines account for more than 60% of company sales, CNN reported. The corporation also predicts $29 billion in revenue from COVID shot in 2022.

At the Atlantic meeting, it was Bourla’s word choice about “criminals” that is turning heads.

"I don't think that Albert Bourla knows very much American law,” responds Scott Shepard of conservative think tank National Center for Public Policy, “because the First Amendment guarantees that any sort of discussion about current events, and things being mandated for people's bodies, isn't criminal.”

Shepard, whose right-leaning group supports free markets, points out that a company involved in clinical trials for the Pfizer vaccine fired a researcher who alleged adverse effects were not disclosed, reports were falsified, and the trial itself was handled sloppily.

That person has been identified in news stories as Brook Jackson, a regional director for Ventavia Research Group. Her allegations were published in the British Medical Journal and she also reported her concerns to the U.S. Food and Drug Administration.

Ventavia refuted the whistleblower’s allegations and said Jackson --- who gave the Journal evidence of wrongdoing --- was not involved in the clinical trials.

According to the Journal, however, it heard from other Ventavia employees who backed up Jackson's claims. The medical publication also alleged the FDA conducted inspections at nine of the 153 trial sites for the Pfizer vaccine but did not visit the Ventavia lab despite receiving Jackson’s anonymous whistleblowing report.

FDA, meanwhile, has approved emergency use authorization of the Pfizer vaccine for children as young as five. The federal government has purchased 115 million pediatric doses, enough for every child in the U.S.

Pfizer announced last week that it will seek FDA approval of an antiviral pill for COVID-19 now that is has finished a trial study of 775 adults, The Associated Press reported.

Rival drug maker Merck has already produced a pill that is already under FDA review, the AP said.

Reacting to the promise of a pill to fight the virus, Dr. Marty Makary told Fox News that no one with COVID died from it during the clinical trials.

"These two drugs really, truly mark the end of the pandemic," she predicted, "and a move to the endemic phase. That is the phase where it'll circulate at low levels and we have to learn to live with it."

Fired nurse sums up feelings of many: I'm not an experiment

A hospital nurse who was hailed a hero over the summer, and now fired from her job, is mirroring the same pain, fear and frustration felt by many others who are fighting for the legal right to keep their job if they refuse The Jab.