Subscribe
Does liberal media prefer a RINO over a lazy Dem?

Does liberal media prefer a RINO over a lazy Dem?

A Pennsylvania pro-family activist is surprised The Associated Press would do what might be considered a "hit piece" on a Democratic Senate candidate. 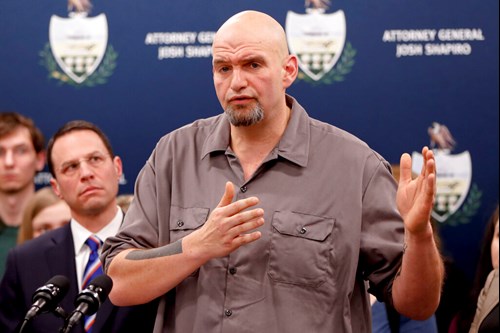 With the election is a little over a month away, AP has published a story that calls into question John Fetterman's (right) work ethic as lieutenant governor of Pennsylvania. The news provider poured over documents related to the Senate hopeful's daily calendars and attendance records.

"[Those records] show that Fetterman typically kept a light work schedule and was often absent from state business, including presiding over the state Senate, which is one of his chief duties," AP reports. "Even on days where his schedule showed he was active, [the records show] a typical work day for Fetterman lasted between four and five hours."

AP adds: "Some Democrats privately worry that Fetterman is proving a lackluster candidate and losing ground in the campaign" to his Republican opponent, Dr. Mehmet Oz.

American Family News spoke with Diane Gramley, president of the American Family Association of Pennsylvania. She admits being surprised that AP would do a negative story on a Democrat.

"The fact is not only AP but other liberal news outlets have been attacking John Fetterman, actually exposing the truth – which is very unusual for any left-leaning news outlets to expose the truth on any Democrat," she argues.

"So yes, it's definitely a surprise that the AP has exposed Fetterman's lack of any work ethic – and to me it's pretty obvious that work ethic would carry over into Washington, DC [if he were elected to the Senate]."

So Gramley says the question is: Why would AP do it?

"They may be reading the writing on the wall as far as Fetterman's inability to win," she suggests. "Or do they view his opponent Mehmet Oz as a RINO [Republican In Name Only] and his votes may be following some of the progressive ideas of Democrats? I don't know for sure why they're doing that."

The findings described in the article focus entirely on Fetterman's tenure before his stroke, which occurred in May. The article also describes similar trends during his 13-year tenure as mayor of a small suburb of Pittsburgh.

Elon Musk’s plan to purchase Twitter appears to be back on the table, and possibly moving toward a hand-shaking finale, and the left-wing meltdown over allowing free speech and "misinformation" is like a repeat episode.