The pro-life activist facing federal prison for allegedly violating an abortion clinic law deserves an apology from his own government, insists his attorney, who is predicting the Department of Justice case against Mark Houck will fall apart.

Meanwhile, a story published today by The Federalist says there are crucial details that differ from the legal allegations of Planned Parenthood volunteer Bruce Love and the Department of Justice, which used his altercation with Houck one year ago this month to justify indicting and charging him with a federal crime.

The Sept. 23 raid at Houck’s home by a small army of FBI agents immediately angered pro-lifers across the country, since the FBI is already persona non grata to many Americans for its growing list of Gestapo-like exploits against innocent people. That souring reputation only worsened when Thomas More Society, which is representing him, provided more details: Houck was being charged for violating the FACE Act after he shoved an abortion supporter, who was verbally abusing his own son, for an incident that occurred 11 months earlier.

According to a Fox News story related to Houck’s arrest, a spokesman for the Philadelphia Police Department said police officers responded to the shoving incident but no charges were filed against Houck and he was not arrested. Love's own lawsuit against Houck, which was obtained by The Federalist this week, was later tossed when he failed to show.

In a Sept. 28 AFN story, Thomas More senior counsel Peter Breen dropped even bigger revelations. The law firm had learned in June the FBI was investigating Houck, Breen said, so Thomas More attorneys tried to persuade the U.S. Attorney’s Office it was pursuing a losing prosecution. That's because the Feds lost a similar FACE Act case – in the same federal court district – to Thomas More in 2019.

Expecting the federal prosecutors would pursue the case anyway, Thomas More assured them Houck would appear in court to face the charges if indicted but, instead, Thomas More learned the FBI appeared at his home and took him away in handcuffs.

Related to Houck’s early-morning arrest, an exclusive story by The Federalist, published today, sheds new light on the FBI raid. An email from Thomas More attorney Matt Heffron, dated June 9, was sent to Assistant U.S. Attorney Anita Eve but went unanswered through June, July, and August. On Sept. 23, at 8:19 a.m., Eve emailed Heffron to inform the attorney Houck was “taken into custody by FBI agents.”

Houck appeared in front of a federal judge Sept. 27 in Philadelphia where he entered a not guilty plea during his arraignment.

Asked about the next legal proceeding for Houck, a spokesman for Thomas More tells AFN a court hearing is expected in early 2023.

Now looking ahead to a federal court fight, Breen tells AFN he is grateful congressional lawmakers are aware of Houck’s arrest and prosecution, and they are demanding answers from FBI Director Christopher Wray about the investigation and the FBI raid itself.

“If you see control of Congress change to a more pro-life Congress in January,” Breen tells AFN, “I fully expect the attorney general to be brought in front of either the House or Senate, or both, to explain why there was such targeting and potentially deadly action in taking Mark into custody, which was utterly unnecessary since we had said we would present him.”

According to Breen, Houck continues to insist he pushed Love because he was defending his son, 12, from abusive and foul language spewing from Love’s mouth.

That incident, the attorney says, happened 50 feet from the abortion clinic entrance, with no patients or clients around, so there was no violation of the FACE Act.

"That's not a federal violation,” Breen tells AFN. “If there is a crime committed, it's for the local authorities, not for the Feds." 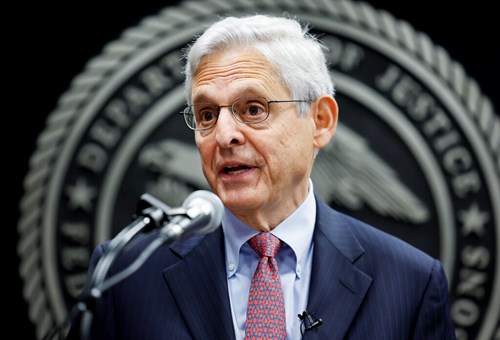 ut the Federalist writer also obtained Love's criminal complaint against Houck, which she points out differs in crucial details. That complaint from the assault victim recounts only one shoving incident, not two. More importantly, the clinic escort wrote in his complaint he was “standing on the corner” and “waiting for clients,” not walking with clients when he was pushed by Houck as the U.S. Attorney’s Office alleges.

As a matter of law, Cleveland concludes, “the facts of the private criminal complaint sworn out by Love do not constitute a violation of the FACE Act because Houck was standing at a corner away from the abortion facility, no clients were involved, and the alleged assault had nothing to do with so-called reproductive services.”

According to Breen, if a new Republican-led Congress is in power in 2023, and Attorney General Merrick Garland is hauled before a committee, Mark Houck and his entire family should attend that hearing to hear Garland's personal apology.

A recent win for a justice of the peace in Texas is being viewed as a win for all faith groups.