Subscribe
Predictions made about new justice, none of them good

Predictions made about new justice, none of them good

Now that the U.S. Senate has confirmed Ketanji Brown Jackson to sit on the U.S. Supreme Court, a conservative black activist predicts the new justice will be recognized as the first black woman to be seated and not for her future opinions.

With three Republican defectors, the confirmation of Jackson to the U.S. Supreme Court became a reality on Thursday in the Senate after a 53-47 vote. Democrats loudly cheered after the vote while Republicans quietly filed out in a quiet, somber-like procession.

In a legal commentary at The Daily Signal, published after the Senate vote, legal scholar Thomas Jipping observes Jackson told skeptical GOP senators the U.S. Constitution should be interpreted based on its “original public meaning.” 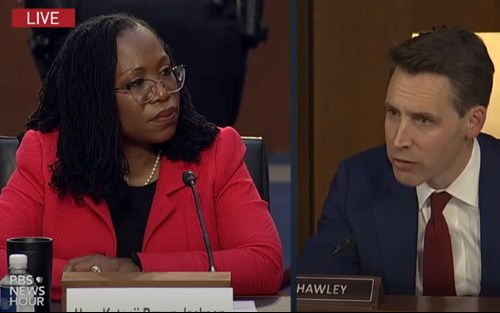 In another exchange, she said the document is “fixed in its meaning.”

“That sounded strange coming from a Biden nominee,” writes Jipping, “who had been recommended by some of the most radical left-wing groups around, but she said it.”

Jackson was coached to deliver those reassuring words to GOP senators, Jipping writes, so he speculates her liberal backers will ultimately be pleased with her future court opinions.

Although the accomplished federal court judge was praised by Democrats for her legal work, Jackson’s nomination came after then-candidate Joe Biden promised to nominate only black women to the U.S. Supreme Court if elected president.

Project 21 member Horace Cooper, a former constitutional law professor, tells AFN the new justice’s court opinions will be overshadowed by her race and her sex. Even if her opinions are "radical" and controversial, he says, they will come second to her skin color.

“I predict that Justice (Clarence) Thomas is going to be recognized by historians as one of the most important and impactful justices in terms of the jurisprudence that he embraces,” Cooper says, “a constitutionalism that recognizes the limited role of judges and tries to treat the Constitution exactly that those who ratified it would have considered."

Regarding the new justice’s left-wing views, pro-life activist Kristi Hamrick of Students for Life Action says Jackson’s rulings have favored the barbaric practice of partial-birth abortion and have attacked the free speech rights of pro-life protesters.

“These two things alone should have disqualified her,” Hamrick says, “but what’s even more disappointing is the three U.S. senators whose party platform is undeniably pro-life.”

These AGs have had enough: No more masks!

A conservative political pundit is applauding the chief law enforcement officers of 21 states for challenging Joe Biden and his administration on their mandate requiring travelers to wear masks on airplanes.