The U.S. Supreme Court has announced it will hear the religious liberty case of fired football coach Joe Kennedy (pictured), who has been losing court battles since he was fired by a Washington pubic school district in 2015.

The legal battle over fired football coach Joe Kennedy has bounced around the courts for years, like a football bouncing in the end zone, but the coach’s claim that his former employer violated his First Amendment right to pray will finally be decided by the U.S. Supreme Court.

The high court announced late last week it will hear Kennedy v Bremerton School District, a religious liberty case in which the justices will decide if Kennedy was unjustly fired in 2015, as he claims, for kneeling on the field after football games to pray.

The school district, which warned the coach he was violating the Establishment Clause, is represented by an accomplished attorney for atheist group Americans United for Separation of Church and State, the court docket shows.

AFN has reported Kennedy was officially warned by Dr. Aaron Leavell, the school district superintendent, to stop participating in religious activities, such as leading prayers at practice, as a representative of the public school. That activity violated school district policy and was not supported by court decisions about prayer and the Establishment Clause, Leavell states in his three-page letter to the assistant coach.

Ever since he filed suit against his former employer, Kennedy has witnessed the courts side with Bremerton Public Schools but he has continued to fight with help from law firm First Liberty Institute. According to First Liberty attorney Mike Berry, the most recent 9th Circuit decision hinged on the fact that Kennedy was a public-school employee. 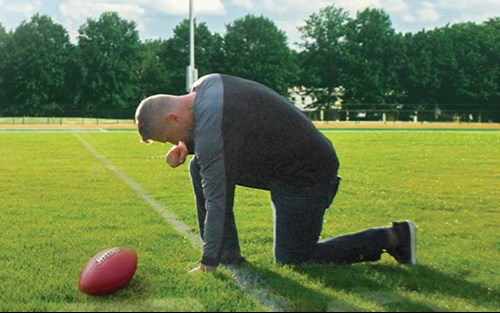 “And that if people in the stands, or in the public in general, could see him praying,” Berry says, “then somehow they might interpret that as the government formally establishing religion, as ridiculous as that sounds.”

Yet the warning letter from Superintendent Leavell, now written seven years ago, insisted Coach Kennedy was “exposing” the school district to “significant risk of liability,” even though the same sentence states the coach did not actively encourage or require participation.

Farther down in his letter, Leavell advises Kennedy he and other employees are “free to engage in religious activity, including prayer, so long as it does not interfere with job responsibilities.” And such activities, the letter says, must be “physically separate” from students and those students must not be allowed to join in the religious expression.

According to First Liberty, the law firm responded on Kennedy’s behalf in October 2019 with a letter warning Bremerton that Kennedy was allowed by the courts to express his faith both in the school building and on the football field. The law firm asked the school district to give its client time after home games to kneel and continue the post-game tradition he had been doing for years. Instead, Kennedy was suspended, then fired, and the fired coach then filed a claim of religious discrimination to the Equal Employment Opportunity Commission.

Facing public backlash over Kennedy’s suspension, Bremerton created a four-page “Q-and-A” defending its actions based on past court decisions about the First Amendment and religious expression. That document, which can be read here, states the school district told Kennedy he can pray privately in the football stadium press box, or in the fieldhouse, but complains the coach and First Liberty insisted on giving him the "spotlight" of the 50-yard line.

Kennedy’s case first reached the U.S. Supreme Court in 2019, where the justices decided not to hear the case. The appeal bounced back down to the 9th Circuit three years ago but with a new legal wrinkle: Four justices on the high court said they were concerned how the 9th Circuit’s decision would affect religious expression as guaranteed by the First Amendment.

In a court order, justices Alito, Thomas, Gorsuch, and Kavanaugh wrote the 9th Circuit’s “understanding of the free speech rights of public school teachers is troubling and may justify review in the future.”

First Liberty is working with attorney Paul Clement, a former U.S. solicitor general, in its appeal to the U.S. Supreme Court.

Bremerton Public Schools is represented by Richard Katskee, the legal director at Americans United and a veteran of arguing Establishment Clause cases before the federal courts.

A family activist in Pennsylvania is not surprised that the state's Democrat-controlled Supreme Court has ruled against efforts to restore voter integrity in The Keystone State.