Leftists said to be real 'vigilante' after Rittenhouse walks free

A sobbing Kyle Rittenhouse hugs one of his defense attorneys immediately after a jury delivered "not guilty" verdicts in his murder trial Friday in Kenosha, Wisconsin.

18-year-old defendant Kyle Rittenhouse collapsed in tears in a Wisconsin courtroom Friday when a jury acquitted him on all charges, including a first-degree murder count that would have meant life in prison.

Rittenhouse and his attorneys presented a self-defense case to jurors after the teenager shot and killed two men, and wounded a third, during a violent night of riots and arson in Kenosha after police shot a black man, Jacob Blake.

Gov. Tony Evers pleaded for calm before the verdict was read and said 500 National Guard members would be ready for duty in Kenosha if needed, The Associated Press reported in a post-verdict story.

Rittenhouse was described by the Left as a “white supremacist” and a “vigilante” for showing up with an AR-15 rifle during the racially-charged riots, but days into the trial even left-wing MSNBC was admitting that attorneys for Rittenhouse were building a good case of self-defense. The same cable news network had suggested Rittenhouse had "gone around shooting people" on the night of August 20 last year.

“I didn’t do anything wrong. I defended myself,” Rittenhouse, who surprisingly took the stand, testified at one point as he sobbed and recalled Joseph Rosenbaum chasing him down the street and reaching for his rifle. 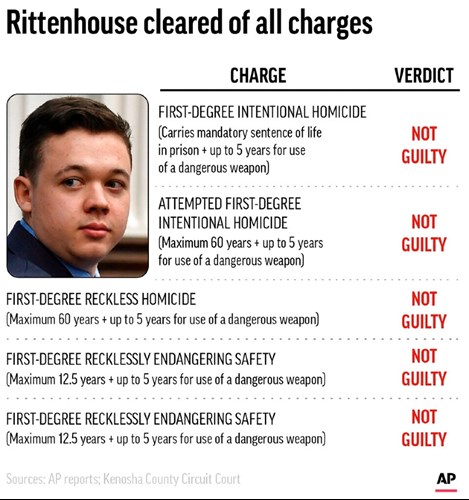 Mid-way through the trial, the prosecution watched Judge Bruce Schroeder throw out their misdemeanor charge that Rittenhouse had carried a dangerous weapon. Citing state law, defense attorneys pointed out the law prohibits carrying a short-barreled version of the AR-15 in public, not the long-barreled version he carried that night.

Months before defense attorneys built that strong case, however, Rittenhouse had been convicted in a court of left-wing public opinion. He was criticized for carrying the AR-15 rifle, which was supposedly obtained illegally. Legal pundits also claimed he had illegally crossed state lines with the firearm. Still others suggested he did not have any reason to be in the city, as if the jury was considering that claim, when in fact much of his family lives in the city. Others claimed he was a right-wing militia member who went to Kenosha to kill black rioters.

Still others have acknowledged during the trial that they assumed Rittenhouse had shot and killed black activists, not white men, who included an Antifa member who was pointing a pistol at Rittenhouse when he was shot.

The New York Post this week published a list of the "10 heinous lies" about the defendant that have been "debunked" since the jury trial began.

Over at MSNBC, black political analyst Brittany Packnett Cunningham said the Rittenhouse acquittal sends a message that "perpetuating white supremacy" is condoned in the nation. Those who stand against it, she said, are "at risk" from other racists who were inspired by watching Rittenhouse walk free.

"We really do live in two separate worlds," Dan Gainor, a media critic at the Media Research Center, said of the Left's version of what happened in Kenosha.

Before last year’s presidential election, then-candidate Joe Biden claimed then-President Donald Trump had failed to condemn the “white supremacist” Rittenhouse. Trump, who was famously proven right again and again during his one term, suggested last fall that Rittenhouse was “very violently attacked” and defended himself from by a mob. 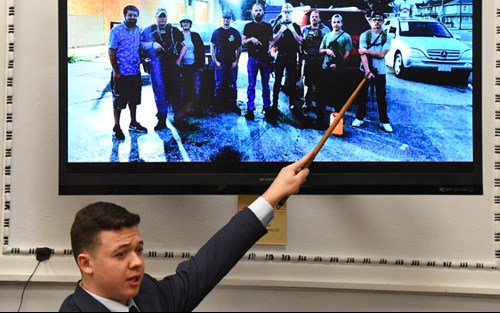 Online donations at website GiveSendGo were leaked to the media in an obvious attempt to publicize and shame those who donated, who included a police sergeant at the Norfolk Police Dept. and an engineer at the Lawrence Livermore National Laboratory.

NBC News, which published a story that publicized those contributors, described Rittenhouse as a "cause célèbre among conservative activists."

“I hope Rittenhouse bankrupts all of you dirtbags in media who smeared him as a white supremacist,” Blazer writer Matt Walsh stated on Twitter. “I hope he ruins your life. I want you to suffer. It’s what you deserve. It’s justice.”

California’s highest court has agreed to hear a free speech lawsuit that is winding slowly through the state courts but promises to quickly attack the First Amendment if the plaintiffs lose the appeal.