At his trial, Kyle Rittenhouse points and describes members of a group, which included himself, that helped protect private property from rioters on the night of Aug. 25, 2020. The teen would later shoot and kill two attackers, and wound a third, later that night.

The criminal trial of Kyle Rittenhouse is playing out like a bizarre show trial in the Soviet Union because it never should have happened, says the legal counsel for a gun-rights group.

“This is what happens in tyrannical despotic regimes in the Third World,” attorney Mike Hammond, speaking for Gun Owners of America, says. “If you are not on board with the philosophy of the ruling dictator, the sanction is prison.”

Rittenhouse, 18, is on trial this week for shooting and killing two men, and wounding a third, during a night of violent rioting in Kenosha, Wisconsin. But the teenager has been convicted already by many Democrats and their media allies who have called him a "white supremacist” and a “vigilante” for his actions that night.

That hatred is likely tied to the fact Rittenhouse armed himself with an AR-15 rifle --- the gun probably most hated by the Left --- as protection from a crazed mob that was burning businesses he was attempting to protect.

In a Twitter post, Joe Biden called Rittenhouse a “white supremacist” and tied him to Donald Trump, and a mash-up of news clips posted online shows left-wing media claiming the teen was chasing people down.

The teenager's plan to hire attorneys and defend himself against the charges made headlines, too: Online donations at website GiveSendGo were leaked to the media in an obvious attempt to publicize and shame those who donated, such as a police sergeant at the Norfolk Police Dept. and an engineer at the Lawrence Livermore National Laboratory.

NBC News, which published the leaked online information, described Rittenhouse as a "cause célèbre among conservative activists."

'I didn't do anything wrong' 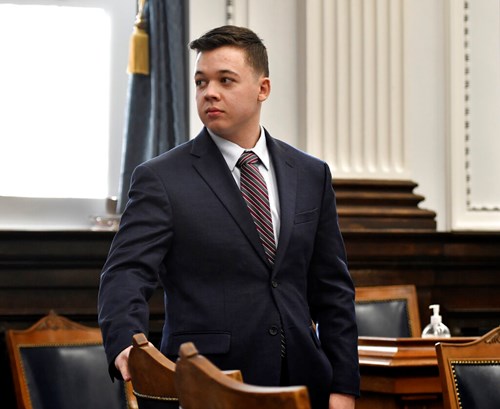 Rittenhouse’s self-defense claim has been bolstered by camera footage showing him being chased down the street by a violent mob. Antifa member Gaige Grosskreutz, who was wounded by the rifle, pointed a pistol at Rittenhouse after the teen tripped and was lying on his back.

“It wasn’t until you pointed your gun at [Rittenhouse] --- advanced on him --- that he fired?” a defense attorney asked Grosskreutz.

“Correct,” the attacker, who was shot in the arm at point-blank range, replied.

“I didn’t do anything wrong. I defended myself,” Rittenhouse testified Wednesday when his attorneys surprised the courtroom by putting him on the stand.

Several legal experts have questioned the decision for Rittenhouse to take the stand, especially after the underwhelming prosecution over five days, but jurors witnessed the defendant sobbing as he recounted taking lives with his firearm.

Newsbusters, the media watchdog, reported Wednesday that legal analysts at far-left MSNBC --- where he was branded a vigilante criminal last year --- are suggesting this week Rittenhouse has built a strong case of self-defense during the trial.

Rittenhouse is on trial, Hammond concludes, because left-wing politics is behind the effort to send him to prison for life.

“And so, when Kyle Rittenhouse defended himself, what happens? He's put on trial for first degree murder," Hammond says. "If he's convicted, he'll go to prison for the rest of his life.”

Human Rights editor Jack Posobiec has been seated in the Kenosha courtroom this week, where he has been reporting on the trial, defending Rittenhouse, and criticizing the prosecution.

"In the Soviet Union, the gulags were full of people who had done nothing wrong under the law," Posobiec told his million-plus Twitter followers. "And they were all convicted anyway."

Attorney: It's about freedom, plain and simple

Despite a federal appeals court telling it to stop, the Biden administration is pressing on with a rule that private sector workers get COVID shots or show a negative test.