The U.S. Supreme Court may have decided not to review a Virginia high school's appeal over a transgender bathroom ban but an attorney familiar with the legal fight says there is much more to be decided.

"A lot of the confusion right now in both the Biden administration and the courts involves the Bostock v Clayton County decision from the Supreme Court last summer," explains attorney Emilie Kao of The Heritage Foundation. "In Bostock, they read into Title VII of the Civil Rights Act the term ‘transgender status’, which is nowhere found in the text. But that's basically created a lot of confusion about all the titles in the Civil Rights Act, including Title IX."

Title IX is part of the 1972 Educational Amendments, which was passed to ensure female athletes were treated fairly in high school and college sports. The law was heralded by feminists at the time as a big step for equality but now, decades later, homosexual-rights activists are claiming Title IX also covers biological males who identify as female. 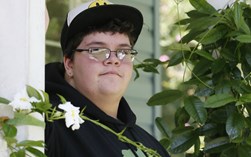 Meanwhile, the Gloucester lawsuit that the high court refused to consider involves Gavin Grimm, who was born a female but identifies as a male and demanded to use the men's restroom. But the Gloucester County School Board's policy required Grimm to use restrooms that corresponded with his biological sex – female – or private bathrooms.

Grimm (pictured above), now 22 years of age, filed a federal lawsuit that wound its way through the courts for six years.

According to Kao, despite the Supreme Court declining a review, there is another aspect of Title IX that the courts are currently looking at.

“And that involves women and girls' sports, and the transgender sports policies," Kao continues. "That issue is also rising up through the courts in the Second Circuit, which includes Connecticut where four female athletes are suing their state's athletic association for forcing them to compete against male athletes."

If that case continues through the courts, Kao says there could be a circuit split between the fourth circuit and the second circuit, which means that appeal could go back to the U.S. Supreme Court.

"Ultimately, that could go to the Supreme Court again," she advises, "and the court would have to look at the Title IX issue again."

A law firm is expressing alarm after the U.S. Dept of Justice announced it has filed an election-related lawsuit against the State of Georgia.