The reliably red state of Arkansas is sadly tackling the issues of sexually-suggestive drag queens and transgender-friendly restrooms in the state legislature, where a Republican lawmaker says her bill demands safety for young girls and demands accountability from public school districts.

House Bill 1156, introduced by Rep. Mary Bentley, requires public school districts to recognize the biological sex of students, and hence their need for safety and privacy, when they enter a restroom or a locker room on school property. Overnight school trips are also covered.

Bentley, a Republican, tells AFN the legislation is a “very simple, common-sense” bill that requires a district policy to recognize basic biology.

“To make sure that girls that are born girls at birth will go to the girls bathroom,” she says, “and boys to the boys bathroom and changing rooms.”

Bentley says she co-sponsored the bill after witnessing what happened in Virginia. In that state, parents were horrified to learn a high school covered up a teenage boy’s sexual assault against a girl in a girls’ restroom. The skirt-wearing teenager, who identified as a girl, was even moved to another Loudoun County high school because of his sexual orientation, where he sexually assaulted another girl.

Bentley tells AFN she is supporting a related bill in the Arkansas Senate, SB 43. That legislation deals with a newer issue arising in some public schools: wig-wearing, half-naked drag queens performing in front of students. The drag queens are being welcomed by unapologetic school officials because it promotes “tolerance” and “acceptance.”

Such an incident most recently occurred at a “diversity breakfast” in Columbia, Missouri, where middle school students were in attendance and parents were not informed drag queens (pictured below) were performing.

Bentley says Senate Bill 43, if passed, prohibits children from attending sexually-suggestive drag shows in Arkansas much like they are banned from adult bars and strip clubs. 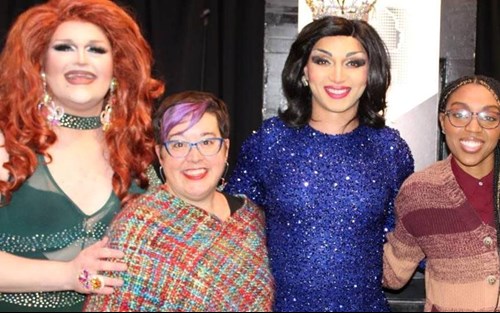 In the case of the Missouri event, the event’s organizers claimed the middle schoolers witnessed a “G-rated performance” and said only two parents complained, The Columbia Daily Tribune reported.

Proposed budget cut seen for what it is