Subscribe
High school wants cops back in hallways after shooting

High school wants cops back in hallways after shooting

A public school district in Maryland that booted school resource officers from its high school hallways, in the name of student safety, is inviting them back after a 17-year-old shot and critically wounded a classmate on campus.

The Washington Free Beacon first reported on the post-shooting mea culpa at Magruder High School, where Steven Alton Jr. allegedly shot a classmate in a school bathroom. The wounded student was later found there, and police were called to the school and found the alleged shooter in class with a handgun.

The same Montgomery County Public Schools that yanked funding for school resource officers (SROs) in March 2021 announced after the shooting it was asking armed law enforcement to return to high schools in the county, the Beacon said.

At the height of the anti-police movement last year, SROs were replaced with mental health workers and restorative justice training sessions. A county lawmaker, Will Jawando, said last year that decision would keep students “safe, holistically.”

Kenneth Trump, a school security expert who leads National School Safety and Security Services, tells AFN educators are “eating crow” after the school shooting, and it was politics behind that serious error in judgement, he says.

"It was something we could see coming from miles away," he insists. "But they're learning the hard way and, unfortunately, in some school communities they're learning at the expense of the safety of the children and school staff." 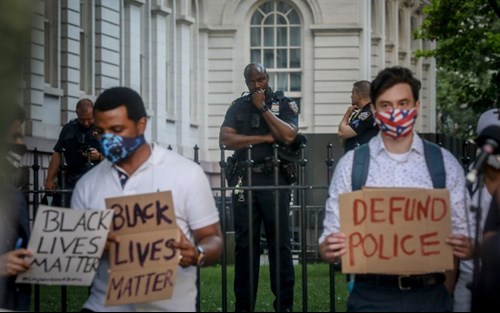 The presence of uniformed police officers in schools is an outgrowth of the “community policing” effort, when police chiefs and county sheriffs wanted to project a kinder image beyond an officer with a radar gun and a speeding ticket. That effort includes schools, too, where students interact with law enforcement daily.

Randy Sutton, a law enforcement advocate who leads The Wounded Blue, tells AFN police are needed even more in today's schools because students are being indoctrinated to distrust police officers who are, in reality, protecting them from evil.

According to Sutton, Montgomery County Schools experienced numerous sexual assaults, and crimes involving drugs and weapons, after police officers were shown the door.

"Students around this country need to be exposed to the police," Sutton says, "and see that they are there in order to protect them."

The mea culpa in Montgomery County mirrors Democrat-led cities where politicians openly punished police departments by slashing their budgets. Those decisions are now being reversed across the country after violent crimes spiked dramatically.

Gabe Albornoz, a Montgomery councilman, told the Free Beacon the school shooting was a "wake-up call on a number of different levels."

According to Trump, public schools did not need to make an either-or decision about cops in schools.

"You need to have some political courage, stand up for best practices, and what it's like to make schools safer,” he insists, “not to make decisions based on political agendas to save your school board seat and your superintendency job."

Not everyone is applauding the idea of creating a homeschool advisory council in Maryland's Department of Education.