A Virginia-based conservative columnist says parents in the Old Dominion need to sue local school districts that continue mask mandates despite an order from the governor to stop.

One of the first things Governor Glenn Youngkin did when he took office last month was issue an executive order giving parents the choice regarding their children wearing masks at school (see earlier story). But several counties – including the "ground zero" for mask mandates, Loudoun County – defied the governor and doubled down on the mandate, even threatening to charge non-compliant students with trespassing:

"Until you arrive, your children will be held in an in-school restriction situation here at school," one assistant elementary school principal said in a message for parents of unmasked students. "They are not allowed on campus or on Loudoun County public school property – and starting tomorrow, it will be considered trespassing."

Robert Knight, a conservative activist and a columnist for The Washington Times, lives in northern Virginia.

"Governor Glenn Youngkin was elected on a pledge to end this nonsense," Knight tells AFN, "and yet the Loudoun County school board – of which six members are under recall by the citizens of Loudon County – is going ahead and forcing schools to have mask mandates. And they're isolating students whose parents are taking the governor at his word that they don't have to mask their children anymore and they're sending them without masks and they're being punished."

Knight offers advice and encouragement to those parents. "Loudon County parents need to sue their school board over this abuse of power," he urges. "They need to double their efforts in recalling these school board members, and they need to take whatever action they can – including yanking their kids out of these schools." 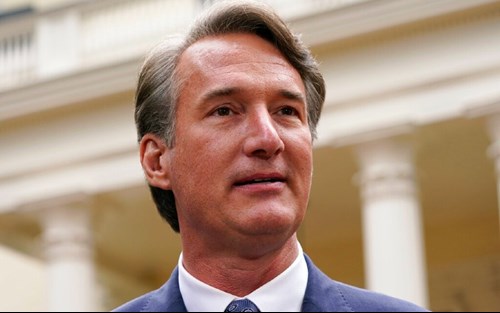 At least one suit has been filed.

Meanwhile, on Tuesday the Democrat-controlled Virginia Senate overwhelmingly (29-9) approved an amendment giving parents the right to choose if their children wear masks to school. That amendment to Senate Bill 739 reads as follows:

"Notwithstanding any other provision of law or any regulation, rule, or policy implemented by a school board, school division, school official, or other state or local authority, the parent of any child enrolled in a public elementary or secondary school, or in any school-based early childhood care and education program, may elect for such child to not wear a mask while on school property. A parent making such an election shall not be required to provide a reason or any certification of the child's health or education status. No student shall suffer any adverse disciplinary or academic consequences as a result of this parental election."

Youngkin (pictured above) applauded adoption of the amendment, noting the "overwhelming bipartisan show of support" and calling it "a significant step … for parents and children."

The Associated Press reports that earlier this week the Democratic governors of four other states – Connecticut, Delaware, New Jersey, and Oregon – announced plans to lift statewide mask mandates in schools by the end of February or March. Those governors cite the rapid easing of COVID-19's omicron surge as a reason for their decision, along with a growing sense that the virus is never going to go away and Americans need to find a way to coexist with it.

"This is an election year, and increasingly it looked to the American people like school closings, mask mandates, and all the rest of it were becoming the signature issues of the Democratic Party," Bauer tells AFN. "It's not a good look – so I think some politicians might be trying to do a course correction."

"And the reason it was so closely contested in a heavy Democratic state at least in part was because his opponent emphasized that he would open the state back up and do away with some of the more ludicrous mandates," the head of Campaign for Working Families explains.

"I'm sure that many people … and businesses in New Jersey are breathing a sigh of relief as they see rational thought begin to return to the minds of some of their governing officials."

Meanwhile, a Republican lawmaker in Florida is considering legislation that would cut funding for school districts that implemented mask mandates despite a recent executive order signed by Governor Ron DeSantis (R). According to the Tampa Bay Times, State Rep. Randy Fine proposed a move that would punish the dozen districts that enacted mask mandates at some point last year – and he said those districts should have $200 million taken away and given to the 55 other districts that adhered to the governor's order.

College under investigation after ignoring anti-Semitism

A legal defender for human rights says it's a shame that Jewish students are feeling pressured to shed their identity when most other groups are encouraged to celebrate theirs.