A longtime critic of China’s communist-led regime says the nation’s freedom-crazing citizens are bravely raising a flame for liberty that was lit by the unlikeliest of causes: an apartment fire that killed innocent victims trapped by their own government.

According to The Hill, the wave of protests that have broken out across China can be traced to the city of Urumpqi. In that city of 3.5 million, an unknown number of people were killed when fire swept through a high-rise apartment building (pictured above) that was locked from the outside. Because someone had tested positive for COVID-19, the city block fell under China’s authoritarian “zero-COVID” policy, which meant the apartment dwellers were forced to remain behind locked doors and were not allowed to leave.

Gordon Chang, a well-known expert on China and its communist leadership, tells AFN it is true the people died because doors and windows had been welded shut.

“And there was a fire in Urumqi, the capital of the Xinjiang Uyghur autonomous region,” he says, “and firefighters couldn't get to the building because of COVID barriers.”

According to The Hill, video footage of the tragic fire was shared on social media and spread across China. The horrific footage of people dying, and other trapped citizens unable to help, poured gasoline on restrained anger after strict lockdowns have trapped tens of millions of people for weeks and months.

The western world cannot appreciate what it means for a citizen of China to appear on a public street to protest. The cell phone in your hand is being tracked by authorities, confirming if you were among the chanting crowd that disobeyed an order to go home, or if you watched protest footage on YouTube. 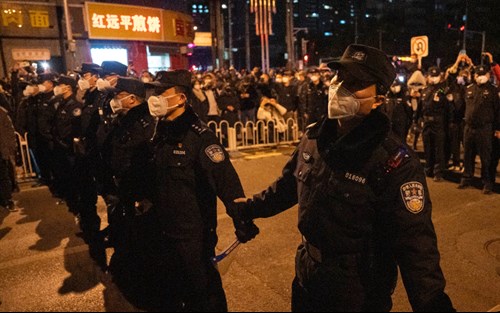 Even in a big crowd at night, a sea of surveillance cameras are recording your face, too. So everyone who gathers knows the Chinese government is identifying every person there, which means the police could appear at your front door in the morning to drag you away.

Knowing they are hated targets, protesting crowds have assembled in more than 10 cities to not only protest the “zero-COVID” policy but to risk torture and prison by denouncing the Chinese Communist Party that crushes dissent - and its own citizens - like an annoying ant.

“Xi Jinping! Step down! CCP! Step down!” demonstrators chanted in Shanghai, the famous city of 26 million, over the weekend.

Because everyone has a cell phone, it is true the Chinese Communist Party can track its people and punish them. But that also means that phone can show the "White Paper" movement mocking President Xi and rally people after a protester was dragged into a police car after urging others to not be afraid.

The outbreak of protests is being compared to the famous Tiananmen Square protests in 1989, which was led by university student but crushed by army troops and tanks. Chang, however, says that movement was simply asking Communist leaders to give the people more freedom and to replace hardline leadership.

“The protesters that we have seen over the weekend have been talking about removing the Communist Party, getting rid of Xi Jinping,” he tells AFN. “So the sentiments are revolutionary.”