Subscribe
Wokeism – a 'vogue virus' that will die off, says author

Wokeism – a 'vogue virus' that will die off, says author

Coming out of the 2022 midterms, it appears Congress will morph only slightly; American society, however, will remain threatened by leftists. But an author and former Fox News radio producer argues their efforts have an expiration date stamped on them. 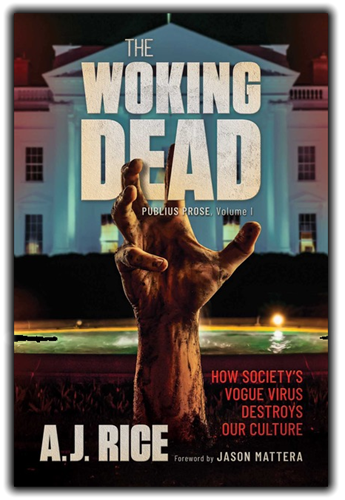 A.J. Rice is the president and CEO of Publius PR and author of a new book* that Fox News' Laura Ingraham describes as "a must-read takedown of the cultural and political forces rampaging across America." In the book, says Texas-based radio host Jesse Kelly, Rice "exposes how [those forces have] been using academia to build an army of anti-American, group-think zombies."

In an interview with American Family News, Rice describes the previous two years of "medical tyranny" facilitated by the coronavirus as nothing more than "part of an authoritarian dress rehearsal" during which America has been "slow pumped the true virus: wokeism."

Wokeism comes in "many different flavors" – among them, cancel culture, critical race theory, and attacks on churches and school, he lists. Rice also argues "many other tyrannies" reside within wokeism – e.g., the #MeToo movement, Antifa, and Black Lives Matter.

"What's at their core is the latest iteration of Marxism," he contends – quickly adding that that presents a problem for Marxists in America.

"They're not going to get a worker's revolt or get 'workers of the world' to unite because of something our country has: [it's] called a middle class," he explains. "Most of the time when Marxism overthrows a king or a government, it's where there is no middle class, but [where there's] a peasant revolt.

"[But] blue collar workers [in America] are patriotic," he continues, which has forced the Left to turn to another tactic: "Instead of getting a worker's revolt, they decided to do the long march through institutions."

Rice lists those institutions: "[Marxists] took over the media, newspapers and radio; and they took over the entertainment industry; and [they took over] public schools, all the way up, from kindergarten to law schools."

Ultimately, he contends, "they found a home in the Democratic Party of Margaret Sanger and Woodrow Wilson – the progressive, eugenicist icons of the age."

The battle is not futile

Fast-forwarding to America's current predicament, Rice says: "We're still fighting the same villains – academia, teachers' unions, Hollywood, [and] Democrats." And it has become a tougher fight because Big Tech "acts as a force field for them, [as] their midair refueling tanker … digital Brownshirts, as I call them."

But Rice warns that it remains "a vogue virus" despite opposition over the decades. "They've had power and little victories along the way – but remember, Roe v. Wade just got overturned," he notes.

"They're not winning all the time, [so] I truly believe this is the tyranny of the minority," he continues. "The run-of-the-mill American people, even Democrats, don't want the country going the direction [Marxists are] trying to take it."

"The grooming of children, the taking over of women's sports, persistently trying to remove God – [those are] not what the majority wants," he adds, resulting in this: "Wokeism and cancel culture has an expiration date."

"While this virus [of wokeism] is more dangerous than coronavirus, it's also a trendy, cultural virus," Rice said. "It needs to be stopped – and it's only going to be stopped by people who take control of their school districts, their counties and boroughs, from state legislatures all the way up to the federal level."

A proposed treaty at the United Nations could punish people who are opposed to the homosexual/transgender movement.