Subscribe
Of numerous failures at Uvalde, 'warriors' never showed up

Of numerous failures at Uvalde, 'warriors' never showed up

A terribly critical report from a committee investigating the Uvalde school massacre spreads the blame to almost everyone involved on that horrific day but a law enforcement veteran says the numerous failures by badge-wearing first responders are especially difficult to read.

The report detailed “systemic failures and egregious poor decision making” on May 24 when 19 fourth graders and two teachers were killed by a gunman at Robb Elementary School in Uvalde, Texas. 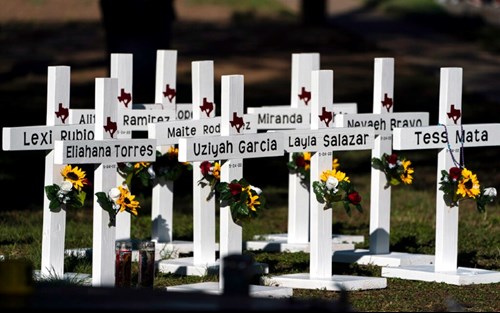 According to the report, the elementary school teachers had been worn down by emergency school lockdowns because those happened every time Border Patrol agents chased a carload of illegal immigrants anywhere near the school.

How often did that occur? According to The New York Post, Robb Elementary had been forced to lock down because of so-called “bail-outs” 48 times during the 2021-2022 school year.

Randy Sutton of The Wounded Blue says most of the blame falls to the law enforcement agencies that responded to the shooting but waited for more than an hour in the hallway while gunfire was still coming from the classrooms.

“It doesn't surprise me, what I read,” he tells AFN. “But I was discouraged by the incredible lack of leadership. What a blackeye for law-enforcement this really has.”

According to the report, approximately 400 law enforcement personnel had swarmed to the elementary school but no one on the scene utilized active shooter training and “failed to prioritize saving innocent lives over their own safety.”

In an active shooter scenario, police are trained to ignore their own safety, and even wounded cops and civilians, to locate and neutralize the threat.

After reviewing the report, Sutton says law enforcement on the scene lacked leadership to the point that a mandatory command post was never established. What was worst of all, he says, was the lack of raw courage to protect the innocent.

A Christian apologist agrees with a secular author who says America's troubles are the result of a spiritual problem.