Winston Churchill, the larger-than-life British leader who rallied his besieged nation to resist and fight Adolf Hitler, continues to be a target by a culture that is free to look for racists behind every tree because of heroes from history.

Churchill served as prime minister during World War II, when Hitler’s armies marched across Europe and stopped at the English Channel. Some in the House of Commons called for their country to make peace with Hitler after suffering through World War I. Churchill, who had watched Germany’s rise for a decade, knew that was folly.

The legacy of Churchill, who stepped down as prime minister in 1945 and died in 1965, mirrors the current push in the United States to erase from our history Thomas Jefferson and George Washington.

David Barton, the historian and leader of WallBuilders ministry, says the Brits are engaging in "Presentism,” which means interpreting past events in the terms of modern-day beliefs and values. 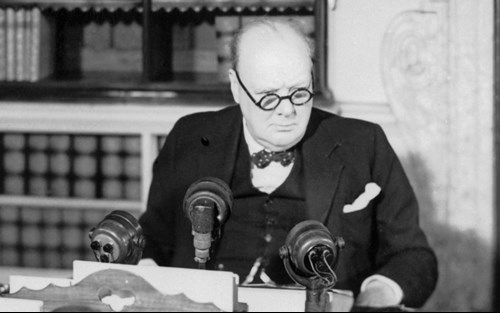 “It really is a bad thing to judge on standards that change from generation to generation,” he tells American Family News, “rather than the immutable standards, and that's so much of what today's culture does.”

For the modern-day American, that means ignoring that George Washington led an untrained Continental Army against the greatest military might in the world. Jefferson, at age 33, penned the first draft of the history-changing Declaration of Independence.

For the people of Great Britain, whose history has plenty of legitimate villains, it was Churchill who encouraged them when the Luftwaffe bombed London for 57 straight days in 1940, killing tens of thousands.

The left-wing push to punish Churchill dates back years but it was recently addressed when Bloomberg News published an op-ed by historian Max Hastings, who ultimately defends the British leader.

A click-baiting social media post at Bloomberg called Churchill “racist” but Fox News points out that, in the article itself, Hastings attempted to strike a fair balance about the famous British leader.

“Why is it so difficult for others to accept that the middle ground is where truth lies about most things in life?" Hastings wrote. "We must judge every man and woman by the standards of their times, not those of our own."

In other words, presentism.

"Churchill is responsible for saving the greater part of the free world at the time,” Barton points out. “He's got blemishes. He's got things that are not right, but you have to look at what was going on in that day, in that culture. And he was so far ahead of the rest of the people in his culture in doing things that really saved the rest of the world."

A new series of well-researched articles shows that the gambling industry is "dramatically" hurting public health.