In a video uploaded to YouTube, Wyoming high school student Grace Smith is pictured in handcuffs for trespassing at her school where she has fought a mask-wearing policy.

A teenage girl who was handcuffed and arrested at her high school has paid a price for repeatedly disobeying authorities over mask-wearing but the incident has made her a hero to many who witnessed a lone teen push back in an era of shut-up-and-obey rules imposed on the public during the pandemic.

The arrest of Grace Smith, 16, a junior at Laramie High, was recorded and uploaded to YouTube and that exposure all but ensured an incident that might have made the local Laramie newspaper went viral on social media. Her arrest also got picked up by national media outlets, including Fox News.

"I wanted to go back to class just so I could learn. I never thought they would actually arrest me,” the teen told the cable news network. “Honestly, it really surprised me to see them put me in cuffs and take me to jail.”

Some critics of the teen can point to the fact she was knowingly trespassing on school property Oct. 7 after being suspended, which the teen and her family have not denied. Others have praised her for braving punishment and compared the lone teen to Southwest airline pilots refusing The Jab; to irate parents confronting school boards over the same policy; and to fed-up citizens in Europe and Australia who are marching in the streets over vaccine passports and job-killing lockdown orders.

To put the teen’s mask-wearing fight in context, Laramie High is part of the Albany County School District, a county where approximately 6,000 COVID-19 cases and 31 deaths have been recorded to date. The state of Wyoming, famous for the lowest and least-dense population, passed 1,000 COVID-19 deaths in early October.

'I need you to wear a mask'

A one-minute video uploaded by Adam Smith shows his daughter in a stand-off with a uniformed police officer who tells her directly she is violating her suspension.

“So are you still refusing to leave?” he asks her. 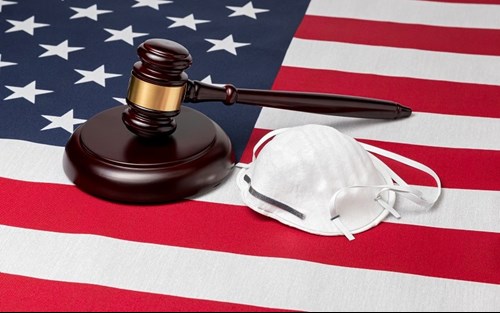 “Even after receiving a citation?” she asks.

“All right,” the police officer says, “then at this point I’m going to place you in custody for trespassing.”

In second longer YouTube video, the teen is asking an unidentified school official if she can go into her class.

“I can’t unless you’re gonna wear a mask, kiddo,” he replies.

“So you’re taking away my rights to go to school?” she asks.

“Well, I need…I need you to wear a mask,” he says, “because that’s what we gotta do right now.”

That six-minute video then jumps to a second school official reviewing paperwork related to Smith’s suspension as the school intercom announces the school is in “lockdown until further notice.”

The reason for that lockdown was Smith’s confrontation with her own high school.

Reacting to Smith’s fight with her high school, Martin Baker of Project 21 points out she was not a “bad apple” who was punished for committing a crime on campus.

“She wasn't some horrible student. She was academically gifted,” he says. “She was active with the school itself, and for all intents and purposes a model student. And now you're going to disrupt her educational experience?"

A conservative who encourages legislators to pass good laws that promote "a Kansas where God is honored, religious liberty flourishes, families thrive, and life is cherished" says a new anti-discrimination ordinance may be setting one town up for a lawsuit.