Subscribe
Drag queen story hour is back but so are protesters

Drag queen story hour is back but so are protesters

The perverse wig-wearing drag queens are back in American public libraries, where they are again poisoning the minds of innocent children, but a group that has fought them nationwide is back with their protest signs, too.

Boston-based MassResistance showed up recently to protest a “story hour” in historic Plymouth, where a local TV news station acknowledged the June 22 event was met with protesters outside Plymouth Public Library.

Arthur Schaper of MassResistance tells One News Now that three women in the community learned of the then-upcoming “story hour” and began contacting others to organize the protest.

The homosexual drag queen fetish is not new to many far-left communities, where drag queens perform at LGBT events and at raunchy late-night clubs. But the sexual perversion not only showed up in public libraries in recent years but was brazenly tied to wholesome children’s story hours, where reading Dr. Seuss is replaced with a pro-LGBT children's book. 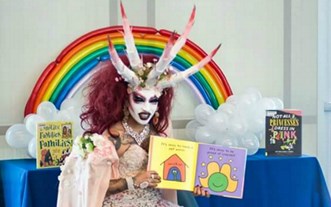 The obvious attempt to influence and indoctrinate children found a willing partner in public libraries, where "tolerant" liberals are often on the payroll and often clash with the community at large.

“We’re all about teaching kids to love who they are no matter what,” Kelsey Casey, Plymouth’s library director, told the TV news station. “So we are introducing them to a wide range of experiences and people.”

Liberal parents have also defended exposing their children in the name of “tolerance” and “acceptance,” and often accuse protesters --- if they show up --- of being “bigoted” and “hateful.”

The name-calling has not deterred MassResistance, however, which has used its nationwide network of grassroots activists to show up with signs ready outside their local public libraries. 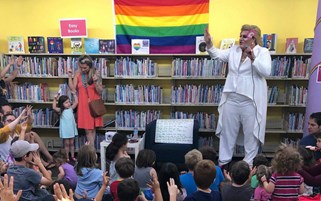 “We're glad to see that people are really waking up,” Schaper tells One News Now, “and they're not afraid of the ‘homophobe’ card or the perverted bullying that people try and push on everybody.”

MassResistance has also dug into the social media history of the drag queens to expose their sordid night-club acts and alleged ties to male prostitution.

In an eye-opening investigation in Texas, MassResistance discovered that City of Houston library officials had repeatedly allowed not one but two convicted sex offenders to interact with children at a 2018 “Drag Queen Storytime.”

William Dees, One News Now reported in a 2019 story, was convicted of sex crimes against children ages 4, 5, 6, and 8. At Houston's library, he greeted children at the door.

The second drag queen present was Alberta Gaza (pictured below), who had read to children before MassResistance uncovered his criminal conviction for sexually assaulting an 8-year-old.

“We deeply regret this oversight and the concern this may cause our customers,” the library said in a statement.

Schaper tells One News Now that public libraries were forced to stop in-person “story hours” during the COVID-19 pandemic but says the drag queens simply went online to hold a virtual event.

“Thankfully, however, these programs got very little attention,” he advises. “In some cases, activists were able to get into the comment sections and just write nasty comments and expose the perversion that was going on. And sometimes they even got those events shut down.”

Yet it appears the in-person “story hours” are coming back, Schaper warns, and that means the public should start paying attention and be ready to show up and protest, he adds.

The president of a ministry that aims to equip and support rising generations to embrace God's truth and champion a biblical worldview says the new poll that finds an overwhelming majority of Americans – including Democrats – support religious freedom is good news.