“[T]here is near unanimity that bullying of any kind is unacceptable and that unjust discrimination should not be tolerated, [but] beyond that, the issue gets thorny, though there is a reluctance on the part of elites to admit it,” Donohue affirmed in a Catholic League press release.

He went on to stress how LGBTQ activists have successfully swayed a large proportion of government officials, and even larger chunk of corporate leaders, to push their agenda.

“It does not exaggerate to say that these key decision-makers see no reason to tap the brakes on any issue of importance to the LGBTQ community,” Donohue impressed. “To that extent, the gay rights movement has been a stunning success.”

From tolerance to outright promotion

The Catholic leader noted how the Biden administration is pushing the LGBTQ agenda to the extreme during Gay Pride Month – going above and beyond the message of tolerance.

“[T]he U.S. Embassy to the Vatican is flying a gay rainbow flag, and House Speaker Nancy Pelosi is front and center celebrating the ‘beauty, bravery and vibrancy’ of this movement,” Donohue added. “Similarly, corporate America has signed on to Gay Pride Month in a way that is startling – the biggest banks, department stores, airlines, professional sports teams, liquor and beer companies, hotel chains, TV networks, newspapers, tech companies and pharmaceutical houses are all on board without reservation. There's the rub – without reservation.”

He clearly drew the line that is intentionally blurred by LGBTQ activism.

“It is one thing to recognize the equal dignity of all Americans – this is a staple of Catholic teachings – independent of their sexual orientation, [but] it is quite another to endorse everything associated with the gay pride agenda,” Donohue argued.

The detrimental effect of LGBTQ propaganda on children was then raised.

‘{W]hy is it necessary for those elites who want to show respect for LGBTQ people to remain silent about the child abuse that is taking place in the name of gay pride?” he asked. “To be specific, anyone who sanctions sex transitioning for minors is promoting child abuse – whether it is intentional or not. Most teens who express a desire to transition will change their mind if given time, [and] moreover, hormone blockers are irreversible, and the next step is sex reassignment surgery. From what [research] we know, the results – in terms of wellbeing – are not auspicious.”

”[Hay] not only endorsed adults having sex with minors – he said the young men would love it,” Donohue informed.

He then quoted the child sexual predator, who was also a supporter of the gay pedophile group, NAMBLA.

"If the parents and friends of gays are truly friends of gays, they would know from their gay kids that the relationship with an older man is precisely what 13-, 14-, and 15-year-old kids need more than anything else in the world," Hay claimed.

Donohue then moved on to Brenda Howard, who held the first Gay Pride march back in 1970, Gilbert Baker, the creator of the rainbow flag, and Allen Ginsburg – considered one of the first intellectuals associated with the modern gay rights movement.

“Known as the ‘Mother of Pride,’ the bisexual [Howard] was a devotee of sadomasochism, bondage and polyamorous relationships, [while] Baker was an anti-Catholic bigot drag queen who went by the name ‘Busty Ross’ – a play on the designer of the United States flag, Betsy Ross,” Donohue informed. “[Ginsberg] was a strong defender of NAMBLA, the organization committed to normalizing child molestation.”

He listed off two other LGBTQ icons:

In lieu of the depraved icons behind the LGBTQ movement, Donohue asked why they were not among the numerous statues and teachings of iconic Americans that were destroyed by urban anarchists and called to be erased from history by other woke protesters – demonstrations that took place last year as most elites stood by and watched or applauded the destructive cancel culture craze.

“Every effort was made to eradicate historic figures from American history texts, and annual celebrations in their name [including George Washington and Christopher Columbus] came under fierce attack,” Donohue pointed out. “If these Americans are worthy of being scrubbed from our history, why should those who founded the gay rights movement not be excised, as well?” 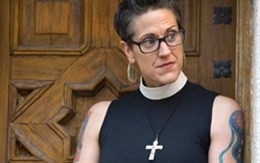 But Donohue made the point that America’s ugly past should not be eradicated – in order to learn from its mistakes.

“Make no mistake about it, the Catholic League is opposed to censoring American history – regardless of the profile of those who shaped it,” the head of Catholic League impressed. “Ditto for those who crafted the gay pride movement. Even seriously flawed persons are capable of making notable public achievements, and judging those who lived long ago by today's standards, smacks of ethnocentrism.”

He then brought up a valid case and point.

“The duplicity, though, is repugnant … why is it okay to trash Harry Truman but not Harry Hay?” Donohue posed. “Those who launched the cancel culture – they are all on the Left – cannot now claim that what they started should stop at their doorstep. If they want to recognize flawed gay leaders, let them recognize flawed American heroes. The best path forward is to cancel the cancel culture and stop with selective moral indignation.”

Parents, be aware and beware

A promoter of child dignity in the digital world is urging parents to protect their children from online predators, as research shows they are upping their game.