The newest poll of Americans shows an overwhelming majority supports same-sex marriage, and a prominent pastor lays the blame on the Church whose influence appears to be waning.

According to Gallup, a record-high 70% no longer oppose two men being recognized as husband and husband after public acceptance has continually rose since Gallup first polled the public on the issue in 1996. That first-ever poll showed 27% in favor a quarter-century ago.

The newest numbers played out as one might expect when broken down by age: 84% of Millennials are on board, but 72% of middle-aged adults, and 60% of older adults, told Gallup they support it.

Gallup surveyed 1,016 adults, age 18 and older, for the poll that was conducted in May.

Respondents were asked, “Do you think marriages between same-sex couples should or should not be recognized by the law as valid, with the same rights as traditional marriages?”

Asked to respond to the Gallup figures, Dr. Robert Jeffress, who leads First Baptist Church in Dallas, did not hold back: the Church has dropped the ball.

One surprise in the poll is politics: 55% of self-identified Republicans support homosexual marriage, the first time that number has been over 50% in Gallup’s tabulation.

One News Now reported this week that RNC chairwoman Ronna McDaniel used social media to praise “Pride Month” and to claim the Republican Party has seen its support from the LGBTQ community double in the last four years. Her comment was ridiculed by the Left on social media for making such a claim but especially for also expressing support for “deeply held religious beliefs,” which would be a nod to the Evangelical voters --- including Pastor Jeffress --- who supported Donald Trump in 2016 and 2020.

As of now, the Republican Party supports traditional marriage. Before the 2020 convention, the Republican National Committee adopted its 2016 party platform that included numerous references to marriage as exclusively between “one man and one woman,” NBC News reported last year.

Jeffress: 'Genie out of bottle'

The eye-opening Gallup poll comes at the same time homosexual activists have hitched themselves to the transgender movement. Not only has that movement spawned the nonsensical “gender pronouns” movements with words such as "Zi/Zir," and replaced "mothers" with “birthing people,” but female athletes and state legislatures are pushing back in a war over legal rights, biology and science, and especially who gets to define tolerance and equality. 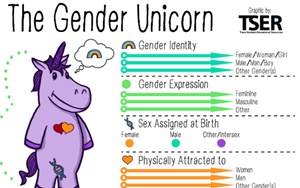 All of those issues can be traced to the homosexual-rights movement and its activists, attorneys, and allies, but it appears a shrinking number of Americans are connecting a drag queen singing to children on Nickelodeon to two men attempting to get a marriage license.

“The genie is out of the bottle,” Pastor Jeffress says.

What that means for the Church, he says, is that faithful Christian believers who believe God ordained marriage as a sacred union for a man and a woman are becoming a minority in their own country.  Many just don’t know it yet.

“I hear these statistics all the time about there are 50 million evangelical Americans who need to vote their convictions,” he says. “Look, if there were really that many evangelical Christians in this country, this country would look much different than it does right now.”

A well-recognized agency within the United Nations raised alarms over a now-edited report that a UN watchdog says is meant to justify explicit sex education.