A new poll suggests blue-state Minnesotans have soured on their police-hating attorney general, Keith Ellison, which could mean electing a Republican to that state office for the first time in 60 years.

According to a Trafalgar poll of 1,079 likely voters, GOP challenger Jim Schultz is ahead of Ellison 49%-45%. Ellison, who is seeking his second term, is well known across the state after serving as the 5th District congressman for more than a decade. Schultz, described as a “political newcomer” by The Star Tribune newspaper, is a private attorney.

So how does a GOP newcomer, in a Democrat-dominated state, have a chance? Trafalgar gives a big clue elsewhere in its polling: Out of six “important” issues listed in the survey, reducing crime and keeping violent criminals off the street is listed first at 41%. 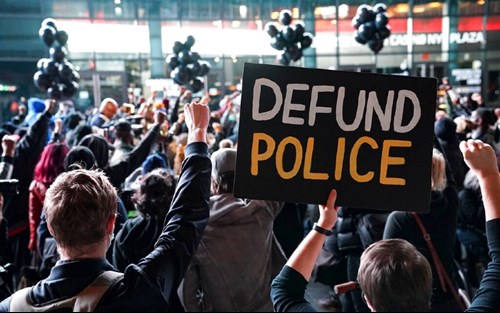 Ellison, who is the state’s chief law enforcement officer, has ridden the defund-the-police wave that he's now trying to jump off. In Minneapolis, where George Floyd died in May 2020 under the knee of a police officer, Ellison supported a wildly radical ballot measure that would have replaced the Minneapolis Police Department with a Department of Public Safety under a new city charter. The new city department would include police officers “if necessary,” the ballot amendment plainly stated.

The ballot measure was rejected by Minneapolis voters last year 56% to 43% in the same city where hundreds of police officers have quit and where crime has spiked. The city is also the largest in the state and hence urban and suburban votes there are vital for any Democrat running for statewide office.

Schultz, meanwhile, has made support for law enforcement a top campaign issue. So far he has been endorsed by more than 20 county sheriffs and by the Minnesota Police and Police Officers Association.

In the same list of important issues in the Trafalgar poll, growing the economy and creating jobs is listed as second, at 21%, and far-left causes such as fighting racism and fighting climate change are farther down and in single digits.

Elsewhere in the same poll, 54% of the respondents disapproved of President Joe Biden.

Robert Spencer, of Jihad Watch, is familiar with Ellison for his radical Islamic views. Spencer and Jihad Watch have documented his affiliation with groups such as Nation of Islam, Council on American-Islamic Relations, and the Muslim American Society. Much like his current denial he supported defunding the police, Ellison has run from those associations when pressed to defend them.

Reacting to the Trafalgar poll, Spencer says it’s stunning to see. In liberal Minnesota, he says, a black Muslim Democrat checked off all the appropriate boxes for liberal voters to support him.

“They love that in Minnesota,” he says. “So for them to turn against him, and not want him after all, is remarkable.”

The voters in Minnesota are witnessing, Spencer adds, what happens when the general public pays for the “fantasies of the elite,” who don’t suffer from the consequences of their own actions.

“He has private security,” he says of Ellison, “but the ordinary people, they have to pay the price."

A political pundit disagrees with an election analysis that predicts Democrats have a more than 70% chance of maintaining control of the Senate following the upcoming midterms.