Subscribe
The Gray Lady's fake news has a Russian accent

The Gray Lady's fake news has a Russian accent

As The New York Times and others try to spin the Durham findings into a non-story, we shouldn't be surprised. Now that the finger is pointing toward Hillary and the Left and not Donald Trump, they have a vital interest in making the Russian collusion revelations go away.

The New York Times has a problem with Russia. And the truth.

For more than three years, the Times pushed the false Trump/Russia collusion story, making the paper an accessory to what amounted to an attempted coup against the 45th president.

For its sordid role, the Times – known as "the Gray Lady" – won a Pulitzer Prize in 2018 for writing on "Russian interference in the 2016 presidential election and its connections to the Trump campaign."

This past week, they did their best to ignore a bombshell court filing by special counsel John Durham. He said that Clinton-connected people, at least one of whom now works for Joe Biden, hired techies to hack Trump Tower and Mr. Trump's New York residence. They were mining data to create a scenario in which Mr. Trump had colluded with the Russians to tip the 2016 election. Even worse, Mr. Durham indicated, they may have mined data in 2017 from the executive office of the president in the White House.

The Clinton campaign also paid for the Steele dossier full of Russian misinformation that triggered the first impeachment trial. If anyone was colluding with Russians, it was the Clintons and the subservient American media.

"This is probably the greatest journalistic scandal in all of history – and the Times, to this day, won't give back its Pulitzer Prize … and the Pulitzer committee won't ask for it back." (Robert Knight, in an interview with AFN)

In 1974, Richard Nixon was driven from office for covering up a burglary of the Democratic National Committee headquarters at the Watergate complex in Washington, DC.

The Obama/Clinton/Biden scandal is worse, with the latest being an electronic burglary of a candidate and the White House itself. It's on a par with the Obama and Biden administrations' weaponizing America's intelligence agencies – the NSA and the CIA – against Donald Trump and the FBI's targeting parents who protest school policies. And you thought Obama's turning the IRS loose on the tea parties in 2010 was bad.

The Times was not alone in its lack of curiosity over the Durham court filing. Virtually all major media, including the Washington Post, ignored the story for days. But then they took a different tack, rebutting its newsworthiness. On Friday, the Post buried it on Page A-9, noting that the filing "added some details to Durham's previous allegations."

Like Hunter Biden's scandalous deals in Ukraine and China, we're told there's nothing new to see here. That's how they swept Bill Clinton's affairs with Gennifer Flowers and other women under the rug in the 1992 presidential election, dismissing it as "old news." 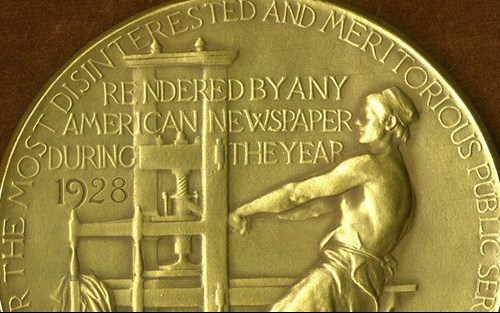 The Pulitzers no longer have much to do with journalistic merit; the legacy-media-dominated committee honors those in its ranks who advance the Left's agenda. In 2020, for example, Nikole Hannah-Jones won a Pulitzer for her introductory essay to the New York Times' 1619 Project – a thoroughly debunked Marxist rewriting of America's founding.

In-depth investigative reporting by conservative outlets has been all but ignored. The Washington Times' series on the Clinton "Chinagate" scandal 30 years ago comes to mind, as do groundbreaking reports by Project Veritas, James O'Keefe's video sting operation.

Even worse than the New York Times' current dishonesty regarding Russian "collusion" was how the paper snagged its first Pulitzer.

The Times' Moscow bureau chief, Walter Duranty, won in 1932 for reporting that everything was fine in the Soviet Union, even as Joseph Stalin was killing millions by starvation and executions.

"There is no famine or actual starvation nor is there likely to be," Duranty wrote in November 1931. "Any report of a famine in Russia is today an exaggeration or malignant propaganda," he added in August 1933.

In 2008, the New York Times ran a front-page story hinting that Republican presidential candidate John McCain had an affair with a female lobbyist. No proof was forthcoming, and the story disappeared after Mr. Obama beat Sen. McCain.

This past week, the New York Times' lack of integrity was on display again during Sarah Palin's defamation suit against the paper. The former Alaska governor and 2008 Republican vice-presidential candidate made a powerful case that the paper wrongly blamed her for a mass shooting.

The Times admitted the "error" and did issue a retraction. But Mrs. Palin said it had been no accident; they had done it on purpose to smear her. The judge directed a dismissal, and the jury ruled on Feb. 15 that she had not proved "actual malice."

But this was clear: The Times had been caught fudging facts to hurt a political enemy.

As the Gray Lady and others try to spin the Durham findings into a non-story, we shouldn't be surprised. They have a vital interest in making the Russian collusion revelations go away. Working with the likes of Nancy Pelosi and Adam Schiff, the legacy media pushed a false, treasonous narrative.

Now that it's unraveling, they're obsessing on the Jan. 6 riot and scrambling away from the scene of their own crimes against truth.

It's what Walter Duranty would have done.

A version of this column ran originally in The Washington Times.

Ever since the demonstration started, the Freedom Convoy truckers been composed, peaceful -- and the American Left can't stand it.