Faced with the prospect of ethnic tensions, economic volatility and the internal instability of China, the West is opting for weakness.

We live in a deeply serious time with deeply unserious leaders.

Historian Niall Ferguson has written that the "extreme violence of the twentieth century" was precipitated by three preconditions: "ethnic conflict, economic volatility, and empires in decline." It is difficult not to see such preconditions repeating themselves in this century. The West is currently tearing itself apart over concerns about birthrate, immigration and multiculturalism. Economic volatility is raging: After a decades-long reshifting of manufacturing away from the West and a reorientation toward finance and service, the hollowing out of the Western energy sector in pursuit of utopian environmentalism -- all punctuated by the Great Recession, the COVID-19 mini-depression and now sky-high rates of inflation -- the global economy sits on a razor's edge.

And then there is the problem of empires in decline.

We tend to think of our world as empire-free, a world of nation-states. But that's not really correct. The United States, however hesitant, is a de facto empire, even if not in the colonialist mold of the British Empire; the European Union would, in any other context, be considered a continental empire; Russia has always considered itself an imperial power, and Vladimir Putin's invasion of Ukraine represents merely the latest iteration of this claim; China has an empire of its own, not merely a nation-state -- as author Ai Weiwei recently wrote, "the people who live in China or come from it are a jumble of more than 50 ethnic and linguistic groups."

The Russian empire is far past decline; it is an economic backwater armed with antiquated military systems, in grave demographic trouble. But China is the area of highest risk today. The Chinese economy underwent tremendous economic growth over the course of the last two decades, but that growth now appears to be stalling out: state-run mercantilism is not self-sustaining, and as China scholar Michael Pettis recently wrote, "China's excessive reliance on surging debt in recent years has made the country's growth model unsustainable... (it is likely) that the country will face a very long, Japan-style period of low growth." China's demographics are entirely upside-down; its population is expected to reduce by nearly 50% by 2100. And President Xi Jinping is about to declare himself dictator for life. 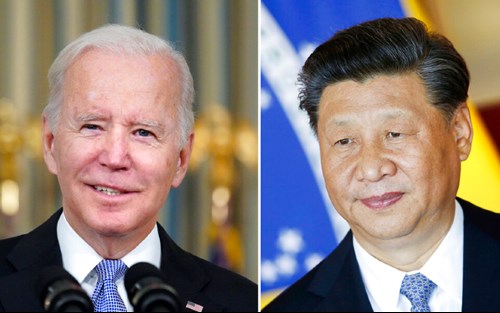 In all of this, China strongly resembles Nazi Germany on the precipice of territorial aggression against its neighbors. Nazi Germany saw tremendous GDP growth, rooted largely in debt, state-sponsored mercantilism and military spending; Germany's fertility rate dropped from above 4 children per woman in 1910 to well below 2 by 1935. Nazi Germany's underpinnings were fragile; Hitler saw his window closing. Military aggression was therefore not unpredictable.

So, what would China's next logical step be? Its eyes are fixed on Taiwan. Given China's historic lust for Taiwan and Taiwan's domination of the all-important production of sophisticated semiconductors, a Chinese invasion of the island would be not at all unpredictable.

Which brings us back to the deeply unserious leadership of the West.

Faced with the prospect of ethnic tensions, economic volatility and the internal instability of China, the West is opting for weakness. Economic growth is the prerequisite for military power; moral strength is the prerequisite for internal cohesion. The West has decided, over the course of years, to abandon its commitment to economic strength, instead fighting a losing war with the climate and promising endless giveaways from the unfunded welfare state; simultaneously, the West has fallen into the self-doubt of dying civilizations, pitting its citizens against each other, labeling them "semi-fascists" and "threats to democracy."

We lie somewhere between the moral collapse of Rudyard Kipling's "Recessional" (1897) and Philip Larkin's "Homage to a Government" (1969). This doesn't mean that the West is on the verge of collapse; China is far more vulnerable than we are. But it does spell a future of chaos and difficulty -- the kind of chaos and difficulty only strength, economic and military and moral, can successfully keep at bay.

It's not really you. It really is them.

We’re told that Attorney General Merrick Garland, who labeled concerned parents as potential terrorists, is now a hero of good government because he has warned FBI whistleblowers not to talk to Congress.