The great re-sorting is here

This week, the incoming New York City Mayor Eric Adams – the supposed rational corrective to uber-radical outgoing Mayor Bill de Blasio – announced that he would allow legislation to proceed allowing local voting for 800,000 noncitizens. The same week, the legislature in California took up a bill that would establish single-payer health care in the state, paying for the increase in costs by essentially doubling taxes (see related story).

Americans have been fleeing the most liberal states in mass numbers. Those numbers are about to increase even more.

Between July 2020 and July 2021, approximately 352,198 residents of New York State embarked for warmer climes. Over that same period, the District of Columbia lost 2.9% of its population. California lost 367,299 people via net domestic migration. Illinois, another failing blue state, saw a net domestic out-migration of 122,460 people. 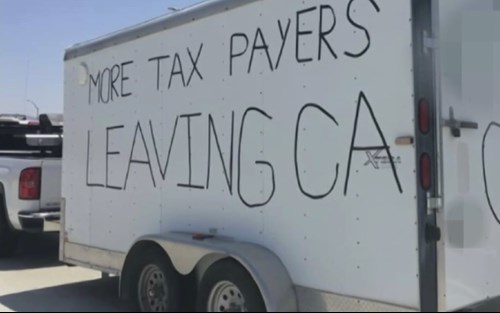 Where did all these blue state refugees go? To red states, of course. Texas picked up 170,307 Americans migrating from other areas. Florida picked up 220,890 people. Arizona picked up 93,026. Idaho had the fastest annual population increase in the nation.

The only region of the country to gain population was the South, which now holds 38.3% of the total population of the country – and which picked up 657,682 Americans migrating from different areas. The Northeast is now the least populous region in the United States, and saw a net population decrease of 365,795 residents. All net increase in population in the West was due to births and international migration, not domestic moves.

It's not just individuals – it's companies. Facebook's parent company, Meta, just signed the largest-ever lease in downtown Austin for floors 34 through 66 of the tallest tower in the city. Elon Musk has relocated his company headquarters to Texas. My own Daily Wire relocated in 2020 from California to Nashville, Tennessee.

In other words, red state governance is a magnet; blue state governance is a disaster. Yet blue states cannot change course. They cannot simply jettison their adherence to failed ideas like single-payer health care or voting for illegal immigrants. To do so would be to acknowledge error. And so instead, they are banking on unearned moral superiority – virtue signaling – to fill the gap where good governance should be. Thus, red states are grandma-killing hellholes (where blue state legislators vacation); red states are brutal suppressors of voting rights (where Stacey Abrams wants to run for governor again); red states are filled with vicious dog-eat-dog trickle-down capitalists (who must be taxed to pay for national spending programs).

None of this is bound to convince Americans to vote Democrat. It's not designed to do so. Democrats have banked on a consistent electoral strategy since former President Barack Obama's 2012 victory – the strategy of driving out a base comprised of minority voters and college-educated women. But that strategy is collapsing – as Ruy Texiera, once the nation's leading proponent of that strategy, admitted in November, "if Hispanic voting trends continue to move steadily against the Democrats, the pro-Democratic effect of nonwhite population growth will be blunted, if not cancelled out entirely, and that very influential Democratic theory of the case falls apart."

It's falling apart in real time. But Democrats can't pull out of the tailspin. They're too invested in the lie that their programs are popular to notice how many Americans are calling up U-Haul.

The evidence of fake justice piles up

Corrupt Democrats almost never face punishment for their crimes. It doesn't matter how glaring the evidence.